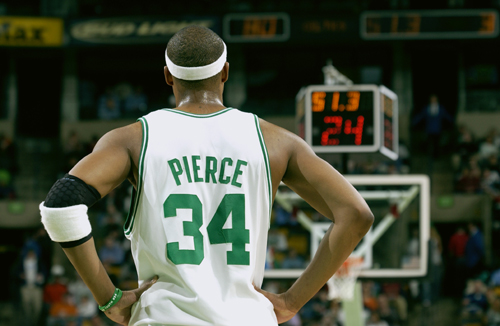 With the Celtics struggling to begin the 11-12 season, several teams have inquired about the availability of Paul Pierce.

One Eastern Conference official said, there are “lots of calls asking if [Boston] will blow it up.”

The Celtics don't have too many assets that they can trade. There's Rondo who they'd be fools to trade. There are the 2 first rounders in the upcoming draft. There's the expiring contracts of Ray and KG. And then there's Celtics Lifer Paul Pierce, who is the youngest of the Big 3, showed last year he still has a lot left in the tank, and is on a fairly reasonable contract.

If you're a fan that didn't like having to wait 22 years between championships, you probably don't want to see the Celtics make the same mistake where they get nothing for their aging players and are excited to see what Pierce could bring in. There will be plenty of fans on the other spectrum that would prefer to see Pierce retire a Celtic for sentimental reasons.


Then there's the 3rd side: What does Pierce want? Maybe he would prefer to play on a contending team the last few years of his career versus go through another rebuilding session with the C's. Pierce was close to demanding a trade out of town the last time Ainge blew up the Celtics and the losing years commenced.

My guess is that Ainge will hold on to Pierce through the season. He'll see if he can add another all-star during the Summer and if he can, Pierce sticking around as the 3rd guy isn't a bad option. If Ainge strikes out in the Summer, I think he then changes course and trades Pierce to a contender.