Doc Rivers in the Running for Father of the Year 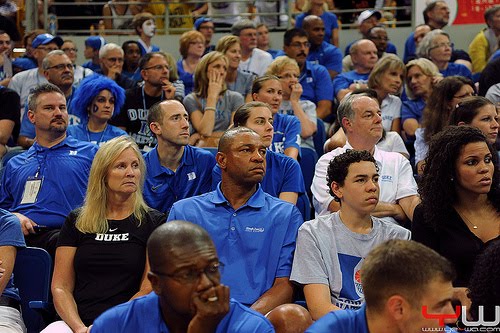 Remember when Doc was weighing whether he wanted to stay on as the Celtics head coach or spend at least a year away from coaching so he could spend more time watching his kids play collegiately? Well it looks like he has figured out a way to do both. It seems every time I turn on a tv and see Duke, there's Doc in the stands. Like today for instance. Duke defeated St. John's, Doc's son Austin had a solid game, and there was Doc cheering him on. My guess is that after a quick dinner, Doc is back on a flight to Boston. So he coached last night, flew to North Carolina, and has to coach again tomorrow in Boston.
Many coaches talk about wanting to spend more time with family. Often this talk comes after a losing season or two. Doc is walking the walk. My guess is that when Doc and Danny met to discuss his new contract, part of the agreement was that Doc would travel on off days, so he could also be a dad. With the compressed schedule as it is, where you have 4 or 5 games a week, credit to Doc for keeping his commitment to his family. Most people would be like, "Son I'm exhausted. I'll watch your game and call you afterwards." But Doc knows he'll only have so many chances to sit in the stands and watch his son play Division I basketball, and if he can make it, he'll be there for every opportunity. It's nice to be able to root for a guy who in my opinion is the best coach in the league. It's even cooler that he also seems like a great person and father.
You may also like: Austin Rivers Tweets on the Celtics and Is Austin Rivers Destined to be a Celtic?