Rondo Could be Sidelined the Majority of February 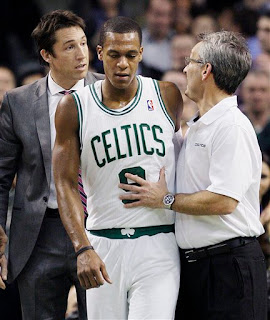 
The point guard was vague about his expected return, offering, “I am going to play -- one day. Maybe like next -- hopefully before All-Star Break. That’s my goal, to come back before All-Star. I’m going to try to get February, like my birthday, like before Oklahoma.”

When a Celtic gets injured you never really know when he'll be back. He could be back the following game or he could be done for the season ('09 KG, '11 Shaq). Danny Ainge will usually say the player is doing fine and he'll be back soon. By now you should know not to put too much faith in that.

Now you add Rajon Rondo to the mix, who tends to talk like Yoda often, and you really get lost. My interpretation of the above quote is that he'll be out for three more weeks, possibly longer. But with that said, I wouldn't be shocked to see him suiting up later this week.

Until then, Pierce will have to overextend himself carrying the team, since we really don't have another point guard. Yes we have a few guards who height wise can be classified point guards, but Keyon Dooling, E'Twaun Moore, and Avery Bradley all are more 2 guards than point guards. Doc has even said as much. Eddie House was more of a 2 guard as well, so it's not the end of the world. The 3 will battle out to be Rondo's eventual back-up. But regardless of the good feeling surrounding our win streak, Rondo is the straw that stirs the Celtics drink and we need him to return 100% healthy if we plan on trying to pull something spectacular off in the playoffs.