Reggie Miller to the Celtics... 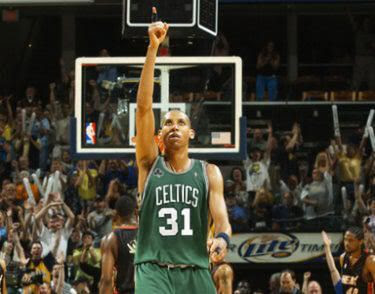 ...Oh what could have been?

I just saw this interesting clip on NBA TV. It's from the show "Open Court" that includes retired NBA veterans Sir Charles Barkley, Steve Smith, Steve Kerr, Reggie Miller, Chris Webber, Kenny Smith and our old pal Shaq-fu. At the 2 minute mark, Reggie explains that had Danny Ainge contacted him in July--1 month prior to when he actually called--he could have probably ended up in a donning a Celtic uniform for the 05-06 season. Also around the 3:20 mark, Barkley makes fun of Shaq's inability to stay healthy for the C's last year...Yeah apparently even people outside of Celtic Nation thought he was humorously-pathetic as well.

Dane(a) B(arros)
After graduating high school in 2006, Dane realized he had to prepare himself for the "real world". Ever since then, he has been writing based on his first hand experiences of heartbreak and rejection. Dane prides himself in being both a rapping satirist and realist. He only writes about things he knows in hopes that one day his introspective hip-hop will make him a better person. He appreciates any and all those that can relate to his music.
Newer
Older