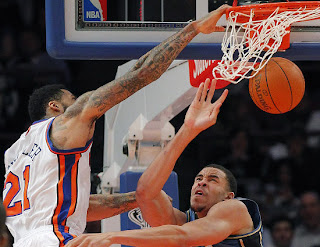 
Wilson Chandler said he has signed a contract with the Zhejiang Guangsha of the Chinese Basketball Association, a move that would essentially preclude him from participating in the 2011-12 NBA season if the lockout ends and the games begin.

The Chinese Basketball Association will not allow players with existing contracts to sign with its teams, so playing in China is only an option for free agents such as Chandler, a restricted free agent who finished the 2010-11 season with the Denver Nuggets.

In addition, the CBA will not allow escape clauses that would allow players to leave the Chinese league in the event the NBA resumes operations. So Chandler would not be a part of the NBA if the season begins on time or even with an abbreviated schedule starting in January or February.

Obviously several bigger name players have signed already overseas, but they all have out clauses. What makes this newsworthy is that Chandler is the biggest name so far to pass on the 2011/2012 NBA season all together. It will be interesting to see if more prominent free agents follow his path to China for a year. In my opinion this is a pretty smart move for Chandler as a few million yen in the hand is worth... (well you know where I'm going with this).

I wonder if our very own Jeff Green will follow this path. Do they sell Butterfingers in China?