Does ESPN have any writing standards?

Remember earlier this Summer when some idiot on ESPN claimed Rajon Rondo was the most overrated point guard in the NBA? Well they're at it again. Check out Spencer Percy's thoughts below from an ESPN article written today. 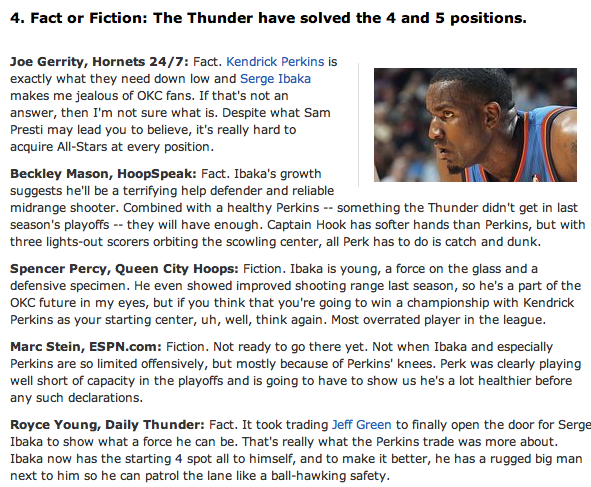 Someone please remind Percy who the Celtics starting center was in 2008. Also remind him how the Celtics were up 3-2 to the Lakers in 2010 before Perk went down. In fact during the Big 3 era the Celtics from the Eastern Conference Semifinals on are now 1-8 in games Perk has been out. He missed a game in the 2008 Finals and they lost. In 2010, they lost the Orlando game where the idiot ref threw him out in the 1st half, because the ref forgot Perk had already picked up a cheap technical. The C's got blown out in Gm 6 of the Finals after Perk's knee injury and then got killed on the boards in Gm 7 and lost without him.

Then this year the C's lost in 5 games to the Heat, who bullied the Celtics around. Perk meanwhile was back in the Conference Finals. Only 4 Celtics have averaged 12 points and 12 rebounds a game in a playoffs in the history of the team. Russell, Cowens, Bird and Perkins in 2009 (when the C's would have made the Eastern Conference Finals at least if Rashard Lewis had been busted for HGH a few months earlier).

I understand that there are Perk haters out there, but you're ESPN. Fact check shit before you put it up. Of course a team can win a title with Perkins as their starting center. they already have.