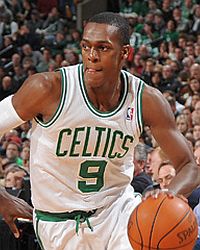 Mannix said Celtics president of basketball operations Danny Ainge will not shy away from dealing any player in order to avoid a slow descent into mediocrity, and he noted that even the team's young star, Rajon Rondo, has been the subject of trade talks in the recent past.

"I think he's talking about moving everybody. I really do," Mannix said of Ainge. "I've had conversations with different people around the league; I would throw Rajon Rondo on that list as well. … He has explored dealing Rajon Rondo in the past. He has talked to other GMs about him in the past. I'm not saying he's been willing to pull the trigger in the past, but Rajon Rondo has been on the table in the past year or so.

"This is just something that Danny does. He's not afraid to make the blockbuster deal if he thinks it helps him in the long term. So, I think Danny is absolutely working the phones right now. I think every one of those guys is on the table for a potential deal that he's sure is going to help him.

"This goes back to what I thought the second after Doc Rivers signed that five-year extension," Mannix continued. "Doc didn't sign on for five years to be part of a team that just decomposes as it goes back to the Gerald Green era from a few years ago. He believes this team is going to be able to contend in Year 3, 4 and 5, when presumably Kevin Garnett and Ray Allen are gone. But to do that, I think Danny is going to have to shake up the roster. And I absolutely believe, right now, before the draft, after the draft, in the offseason, whenever he's able to talk to these teams again once the lockout is lifted, he is going to be aggressive on the phone lines trying to improve his team."

If you recall Ainge has at least three times previously tried to trade Rondo. Once in 2007 for Robert Swift (as part of the Ray Allen trade) and twice again in 2009 with Ray Allen for Rodney Stuckey, Rip Hamilton, and Tayshaun Prince (the other offer was Rondo for the Kings' lottery pick).

As I warned in my column last night, be careful with what you wish for saying that Danny better not trade KG or Ray. If he's not trading one or both of them, Rondo is going to be traded. Ainge told Red he should have traded Bird or McHale. Rondo is not an untouchable to Ainge. And if you think we're getting Chris Paul back for him, think again. You'll probably be very underwhelmed with what we get in return.