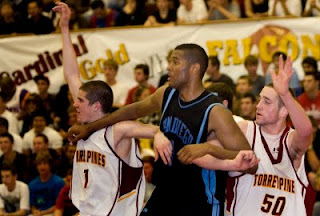 I'm not privy to information on too many of this year's draft picks, but one guy I can talk about is Jeremy Tyler. For some reason a lot of Celtics fans want this kid. They see an athletic young big man. I see a huge bust. Think Eddy Curry, but without the post up game. Living in California while Tyler went to High School there I saw two of his coaches get fired because of him. He was walking drama. He couldn't even finish high school and instead went to play in Israel where I'll leave it to his hometown of San Diego writer Brent Schrotenboer to give the account:


It was September 2010. In the previous 17 months, Tyler had dropped out of San Diego High to play pro basketball overseas. Then his brother James faced an assault charge stemming from a gang-related shooting in southeastern San Diego. After that, Tyler played on a pro team in Israel, where he averaged “about two points, two rebounds and two temper tantrums a game” according to the Israeli newspaper Haaretz.

“Most Israeli basketball fans remember Jeremy Tyler as the American teenager who was a total disaster,” the newspaper said of Tyler’s tenure in Israel.

Also, Tyler has a film crew walking around trying to make some garbage documentary on his life. He also dates Reality TV troublemaker (chose to go the kinder route with my word choice) and daughter of the late Eazy-E. They want to become a "power couple" in their words like Jay-Z and Beyonce.

This past year for some odd reason Israel no longer wanted him, so he was forced to play in Japan. Not exactly a basketball hot bed. Despite a huge size and athleticism advantage Tyler couldn't even average double digits.

I'm all for drafting young bigs with potential. I was for the Perkins pick and I wanted Danny to draft DeAndre Jordan in 2008. But Jeremy Tyler is not the one. Don't waste a 1st rounder on him. At least if you sign Eddy Curry you wouldn't be wasting a pick on him and he can actually play (Not saying we should sign him, though I'd love a reason to post the stories about his driver.)

Now Danny and I don't exactly see eye to eye on draft day (or most other days). In 2006 I wanted the C's to take Brandon Roy, but he traded the pick for Telfair. In 2007 I wanted the C's to take Marc Gasol and Big Baby. At least he got one right, but Gabe Pruitt? Really. I also wanted the C's to buy the Suns pick that they were selling and draft Rudy Fernandez, but Portland did instead. In 2008 DeAndre Jordan was my first choice with Mario Chalmers my second choice. Danny took J.R. Giddens. In 2009 I wanted Chase Budinger to back up Pierce. He fell to the 2nd round and his pick was traded (a couple times), but again not to the Celtics. Danny drafted Lester Hudson. Last year I was hoping James Anderson fell to 19 and he did, but Danny took Avery Bradley instead (The Spurs who almost always draft well took Anderson promptly with the next pick). Jury is still out on Anderson as he injured his right foot after only 6 games. So since I'm dead set on the Celtics avoiding Tyler tomorrow, expect him to get drafted by Danny. Don't say I didn't warn you though.


I wonder where he thinks Doc Rivers University is located?