What the Hell Happened to...Ernie DiGregorio? 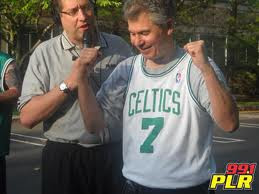 If Charlie Scott and Artis Gilmore are on the all-time WTHHT team, there's a pretty good chance this guy's running the point.  He was a former Rookie of the Year who lead the league in assists.  You might remember Ernie DiGregorio.

Ernie was a star at North Providence High School before heading to Providence College, where he teamed with Kevin Stacom and Marvin Barnes in helping lead Providence to the 1973 Final Four.  Ernie's career at Providence was legendary: He was a consensus All-American and the East Regional MVP in 1973, and the only Friar in school history selected to the Final Four All-Tournament Team. 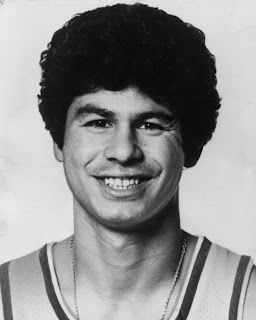 He'd be drafted by the Buffalo Braves, #3 overall, and wouldn't disappoint.  He lead the league in assists his rookie campaign (actually with a measly 8.2 per game) and lead the league in free throw shooting percentage.  He'd be named NBA rookie of the year.  Along with Nate McMillan, they share the NBA record for assists in a game with 25 [crazy McMillan having that, considering he wasn't a pure point guard].


However similar to Tyus Edney, Ernie's best year in the NBA would be his rookie campaign.  But whereas with Edney the league figured him out, Ernie never reached that level again because of a severe knee injury he suffered the next season in 74-75.  He would play with Buffalo for 2 years after that, before being traded to the enemy.  When the enemy waived him in January of 1978, the Celtics signed him. 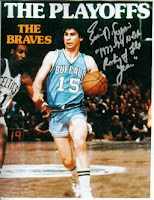 He'd play for the Celtics for just 27 games during that 1978 season.  Interestingly enough, like Tony Delk, he wore two jersey numbers in his short stay with the Celtics, #15 and #7.  #15 would later be retired for Heinsohn so as you can see from the recent Ernie pictures, he enjoys sporting #7 while interacting with kids at clinics and camps.  I bet he's glad #7 isn't retired!

Here's a recent interview with Ernie.  Three things to note before watching: 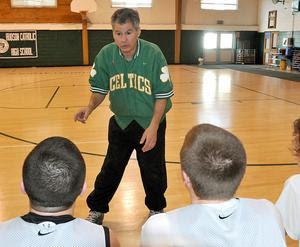 As you can see from the last part of the interview, today Ernie is a celebrity host at Foxwoods.  He apparently hangs out with high rollers and shows them the hospitality of the casino.  Ernie seems as passionate about his job as he was about basketball.