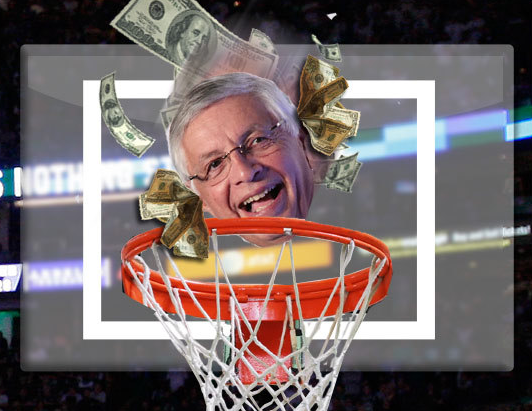 The legal maneuvering in the N.B.A.’s labor battle began in earnest Tuesday, when the players union filed a complaint with the National Labor Relations Board, accusing league officials of failing to negotiate in good faith.
The one-page complaint charges the N.B.A. with making “grossly regressive contract demands,” of failing to provide the union with critical financial data and with repeatedly threatening to lock out players in the absence of a new collective bargaining agreement.
In the one-page complaint, the union accuses the N.B.A. of making “harsh, inflexible and grossly regressive takeaway demands” without offering “appropriate tradeoffs”; “engaging in classic take-it-or-leave-it and surface bargaining” that is intended to provoke a lockout and “coerce” players into accepting the league’s proposal; failing to provide “relevant financial information”; “repeatedly threatening” to lock out the players; and “making demands and threats that are inherently destructive to the collective bargaining process.”

League officials are also accused of bypassing the union to deal directly with players.
The N.B.A. responded in a statement: “There is no merit to the charge filed today by the players association with the National Labor Relations Board, as we have complied — and will continue to comply — with all of our obligations under the federal labor laws. It will not distract us from our efforts to negotiate in good faith a new collective bargaining agreement with the players association.”

I am 100% Team Players on this labor mess. People can say that the players are being greedy. Why should they make millions? What about the police and teachers? Well why should the owners make billions? Trust me if players get paid less, none of that money is going to teachers. Also, athletes are entertainers. Why should Tom Cruise make 50 million for a movie, but Paul Pierce can't make 15 million for a season?

This is what the billionaire owners want:


They are seeking an overhaul of the economic system, including a 38 percent rollback in player salaries — amounting to about $800 million. Owners also want a hard salary cap to replace the current soft-cap system, and they want team payrolls reduced to $45 million, from $58 million.

If you're not great at understanding economics, simply put this is a huge financial cut. Ratings are up, tickets sales continue to escalate and there are longer commercial breaks during games, but the NBA owners are crying poor. No one told you to pay Brendan Haywood and Drew Gooden a combined 100 million. Police your own damn spending.

The players are willing to reduce their 57 percent guarantee of league revenues, but the owners are not willing to negotiate. They want to lock out the players, strip basketball from the fans, and wait for the players to get antsy next Winter and agree to a deal that will make the NBA billionaire owners richer. Don't expect if player salaries go down that your ticket prices will also go down. Trust me on that. That's why I'm Team Players. So who are you siding with?