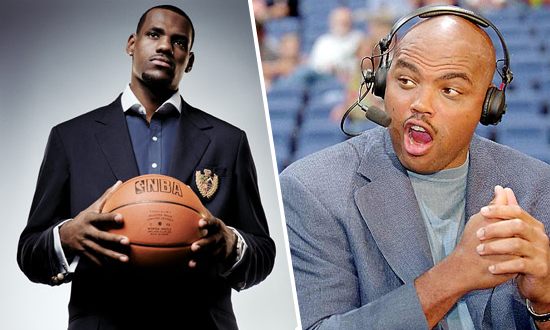 About his comments tweaking the Heat, Barkley said: “I don’t know if Dwyane’s upset with me, but I don’t sit around and worry about it.” He said LeBron James hasn’t said anything to him. “These athletes today are all wussified,” Barkley said. “I’ve been saying LeBron’s been the best player in the league for three years. And I say one thing criticizing The Decision, and I get a phone call from Nike saying why don’t I like LeBron? It’s interesting how this [expletive] works. These groups today, if you don’t say 100 percent positive about their guy or their team, they overreact.”

So how many titles can the Heat realistically win? “First of all, they haven’t won one yet,” Barkley said. “Oh yeah, you all did. After you all beat Boston, you were all praying and [celebrating]. I forgot about that. Do you all count this one [Chicago] as the second?”

Nike coddling of LeBron makes me want to stop buying anything Nike. Remember two Summers ago when Jordan Crawford was a no name college kid until he dunked on LeBron in a Summer pick-up game and Nike went all gestapo seizing all video footage of the dunk? Well if you don't remember it happened. Ha. Well them calling Barkley here is as ridiculous. And you know they've placed more calls. It's just that Barkley is one of the few who will speak up.

Loved Chuck's dig about the Heat's championship celebration after they beat the Celtics last round. After the jump check out Joakim Noah calling the Heat "Hollywood as Hell," as well as the TNT crew's reaction.