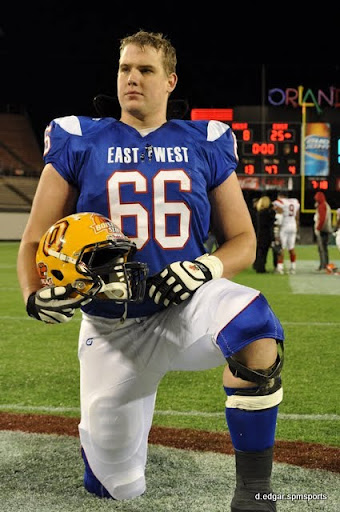 I know that Danny has been talking about the need for size and most of us agree that we need size in our front line to compete, but can a player have too much size?  Chris Forsberg is reporting that the Celtics are targeting Matt O'Donnell, a 6'11", 320 lb offensive tackle with the Saskatchewan Roughriders of the Canadian Football League.

He is approaching Shaq size. He is 22 years and was the second round draft pick of the Roughriders. Forsberg found the story in the Montreal Gazette:


It's believed that O'Donnell has not signed because there has been some interest in the Canadian offensive tackle by the NBA's Boston Celtics. O'Donnell, who is listed at 340 pounds, hasn't played basketball since high school. O'Donnell and Hardaway could not be reached for comment Monday.

Taman had heard about the possible interest in O'Donnell by the Celtics, but that was the extent of it.

"The crux of the matter is we start rookie camp on Wednesday and (O'Donnell) may be the only draft pick (of five in the 2011 CFL draft by the Riders) we don't have in camp at that point,'' Taman said.

O'Donnell hasn't played basketball since high school so that begs the question as to how good he can be. We know he's got size, but does he have skill?  As I have said many times, this is going to be an interesting off season.

UPDATE after the jump...

The Barrie Examiner reports that the Celtics interest extends as far as giving him a tryout along with the other power forwards they have invited in for Wednesday's workout.

Jim O'Donnell said the six-foot-10, 329-pound Matt O'Donnell will not report to the Saskatchewan Roughriders' Canadian Football League rookie camp on Wednesday after the Celtics asked to take a look at the Holy Cross graduate recently.

Matt played intramural basketball at Queen's, but the native of Nanaimo, B.C. — who is also a former Barrie resident — has not played organized hoops since his days at Holy Cross.

A two-time all-Canadian football player at Queen's and a member of the Golden Gaels' 2009 Vanier Cup team, O'Donnell was selected 15th overall by the Roughriders in the CFL Canadian draft last month.

"(The Celtics tryout) came about because of testing (numbers) at the CFL evaluation camp," Jim O'Donnell said. "They looked at his numbers and his athletic ability and (decided) it was worthwhile giving the kid a chance."

Jim said O'Donnell flew down to Boston on Tuesday.