What the Hell Happened to...Charlie Scott? 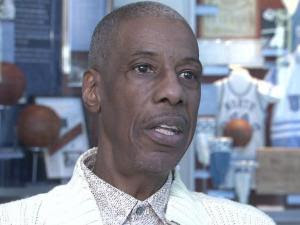 Playing for North Carolina and the Celtics is quite the combination.  For the second time in WTHHT, we remember a Celtics player who accomplished that feat, Charlie Scott.
Charlie was aboutthisclose to committing to Davidson College, because of the strong bond he'd build with Lefty Driesell (Len Bias' college coach at Maryland).  Charlie said:


My mind was made up.  Davidson was the place for me.  But my high school coach talked me into looking at all my options.  He used to take me to watch the Tar Heels play.  Deep in his heart, I think he wanted me to go to UNC, so he was very persistent in making sure that I kept an open mind.  And the more I visited the camps, the more I became enthralled with the school.

As exciting as North Carolina was, it was equally hard to break the news to Lefty.  He was the first person who really recognized me, noticed me, and gave me notoriety.  I had gone to his basketball camp as a junior in high school and that's when he offered me a scholarship.  He told the world about me- no one had really heard about Charlie Scott before I attended Lefty's camp, but that all changed afterwards.  It was the start of a tremendous recruiting circumstance.

When Charlie agreed to play at UNC, he didn't realize it'd be groundbreaking:

After an illustrious college career Charlie was drafted by both the Celtics in the 4th round of the 1970 draft and the Virgina Squires of the ABA.  He began his career in the ABA, and put up mind-boggling numbers, averaging over 30 ppg for the Squires in 2 seasons.  He won Rookie of the Year and made 2 all star teams in the ABA.  However Charlie yearned for the NBA stage and left for Phoenix prior to the 1973 season as he was traded for Paul Silas.  For the next 3 seasons he'd make 3 All Star Games for the Suns, continuing to put up terrific numbers.  However Phoenix wasn't a true contender and wasn't making the playoffs. 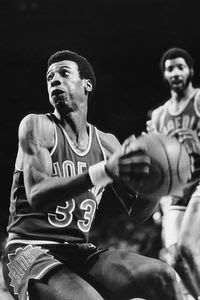 In Jeff Green-esqe fashion, Charlie would be traded back to the Celtics prior to the 1975 season for Paul Westphal and 2 draft picks.  Charlie would fit in seamlessly with Boston, starting and playing all 82 games as Jo Jo White's backcourt partner.  The Celtics would ironically meet Westphal and the Suns in the 1976 finals (where this guy had his moment in the sun) and the Celts would prevail and win the series in 6 games.  In the Game 6 clincher in Phoenix, Scott put up some gaudy numbers: 25 points, 11 rebounds, 5 steals and 3 assists (reminds me of the Rondo performance in Game 6 of the 2008 clincher).

Charlie would play a few more seasons including a brief stint with the enemy (the Celts traded him for Don Chaney and Kermit Washington) before retiring with the Nuggets.  He still considers Boston his home:

We shared a lot of things together as a team.  I just enjoyed my whole time there.  The friendships mean more than anything.  To this day I remain close to Jo Jo.  We get together as often as possible and talk on the phone all the time.  And that just goes back to the Tar Heels and the Celtics being like family.  Once you play for those organizations you become a part of the family, and that's the way it will always be.

[Apparently you have to play for the Celtics.  Being a general manager for like 10 years doesn't give you the same sense of loyalty.  Just ask the Buffoon.] 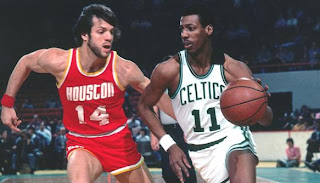 The bottom line is Charlie Scott could play.  The argument could easily be made that he's the second best player in WTHHT, behind Artis (sorry Otis).
Today Charlie lives in Atlanta and works for Russell Athletics in a consulting position.  His son Shaun Scott plays for the UNC JV Team (wasn't sure those still existed at major universities) and a son Shannon Scott who was a McDonalds All American and is attending Ohio State.
Celticslife may try and organize a game with Deion Clark, Ricky Kreklow, Darin Minniefield, Todd Day Jr, Shaun and Shannon Scott.  It'd be the most amazing 3-on-3 game ever.