The Final Note is Ours: the Return of Rajon Rondo

"Although now called rondo form, the form started off in the Baroque period as the ritornello, from the Italian word ritornare meaning "to return" (...) Rondo as a character-type (as distinct from the form) refers to music that is fast and vivacious—normally allegro"

"a work or movement, often the last movement of a sonata"

"The rondo was very popular in the late 18th and the early 19th centuries, frequently providing the form for the final movements of sonatas, quartets, symphonies, and concertos" 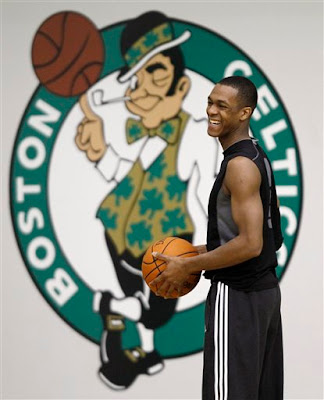 I still remember those spring days in the soccer field, back in my school days. The most skilled players formed a circle around the subs and started passing the ball to each other. The objective was to take away the ball from them, and the task was as painful and fruitless as it could be. I started playing basketball because I finally kicked some leg in order to get the damn ball.

We called that to build a rondo.

More than twenty years later, things haven't changed that much. The only thing that has changed is that I'm now part of the winning team that builds the circle against the contender. I laugh and they try to kick, but I know for sure that there is no way they can take away what we are and what we want.

They will be rondo'd. The Heat will have to look for another league or sport to play after the beating they are about to suffer. Mr Bosh, maybe volleyball or softball would suit you?

As we wait for the start of the Boston-Miami series, I can only think about Rondo and the different ideas that build in my brain as a result of the mere mention of the guy that will make a difference in the games. 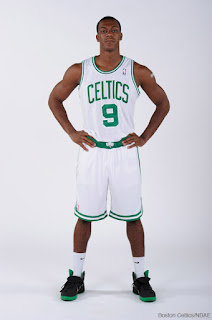 For this is a series in which the factor is Rondo and nothing else is remotely as relevant as that. You know that Paul will play great D on Bron and that their matchup will be epic and balanced. You also know that Wade will get his share of calls from the refs and will be at the line 5-6 times per game but also that he can't play a lick of "D" against Ray and that he will be scorched by "I am already much better than Reggie" Allen. You surely know that Chris Bosh is not even a breakfast (let alone lunch) for Kevin "the Monster" Garnett. It is no secret either that Eddie House and Jermaine O'Neal are thirsty for revenge and will surely bite for blood. It's clear that Baby Davis will get us a game on his own, probably this week. Just because that is what he does best. You know Shaq will be back, Mike Miller and Mike Bibby will underachieve as usual and Jeff Green will finally get mad about something.

It's all very beautiful and very entertaining. But you see, there is only one Rondo and he is a Boston Celtic. The Heat (or anybody else in the league for that matter) have nobody closer enough to Rajon Rondo. You have never seen anybody so unorthodox, so surprisingly able to get a team with several hall of famers on his shoulders and beat the shit out of the most qualified rivals.

The guy is just unstoppable, and has no match in the whole league.

Yes, I know your little brother can shoot free throws with not much lower success and that he will not be invited to the three point contest next All Star.

It doesn't matter and you know it. He is just an artist, a connaisseur of the supreme art of driving the basketball to the hoop and orchestrating the finest musicians in the world. Rondo knows every inch of the court, counts every second in the game and is aware of any single eye movement in the play. He is also a clairvoyant and can predict where one guy will go when he dream fakes once more.

Rondo is the final note, the essential and most refined part of the composition. The last rhyme the rivals will hear in their ears when they lay beaten on the floor. 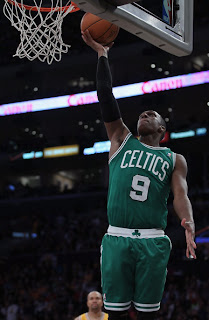 The Miami Heat will be beaten by the Boston Celtics in the next days.

The messenger wears a green jersey with a number 9 stamped on it.

He won't be denied. The Heat will never be able to escape from their fatal fate: to live a dream that will finally die. Killed by the talent and passion of the finest artist and musician in the game.

They say we have flipped the switch, that the swagger is back and the corner has been turned.

I will just say that Rondo is back, and with him the piece is complete, perfect, in pure harmony with the laws of basketball and tradition.

With him we have our Boston Celtics back.