What the Hell Happened to...Randy Brown? 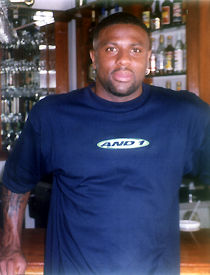 If you didn't begin watching basketball until the 00's, you probably aren't aware of what a game-changer this week's What the Hell Happened To Player was.  Randy Brown was picked by the Sacramento Kings in the second round of the 1991 draft out of New Mexico State.  His first four seasons he'd stay with the Kings and average around 16 minutes a night as a backup guard.  But in October of 1995, Randy would sign with the Chicago Bulls, changing the notoriety his career would have.

Joining any Michael Jordan-lead team would always be a compelling story.  But joining the 95-96 Bulls lead by a hyped up MJ who sought revenge on Nick Anderson, the Orlando Magic and any other competitor who got in his way, was extra-special.  Those 96 Bulls won a league-record 72 games and the NBA title and many people consider them one of the best teams of all time.  Randy Brown was pretty much the fourth guard on those Bulls teams behind Jordan and Ron Harper, and Steve Kerr.  Brown would win two more titles with the Bulls the next two years in 1997 and 1998. 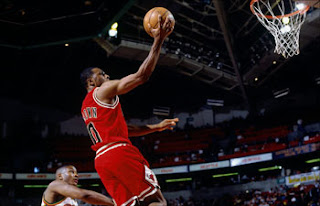 I always find it amusing how certain guys find themselves in the right situation.  More people are likely to remember Gabe Pruitt on the Celtics rather than Lester Hudson, strictly because he was on the title-winning team.  (Pruitt wasn't nearly better than Brown, just making a "fame" comparison).  James Worthy's in the Hall of Fame because he played with Magic and Kareem but Bernard King isn't because he played with Pat Cummings and Louie Orr.

Randy stayed one more year with the Bulls after their second 3-peat concluded, and it was definitely one year too many.  With Tim Floyd patrolling the sideline, the Bulls set a record for futility by going from 62 wins to 13-37 in the lockout shortened season.  That Bulls team was loaded with ideal guys for WTHHT.  Check these names out: Kornel David, Rusty LaRue, Cory Carr, Corey Benjamin, and Mario Bennett were some of their players.  Toni Kukoc and Ron Harper were leftovers, along with Dickey Simpkins, Bill Wennington and Brown.  That was the team that lost a game 82-49 to the Miami Heat.  Defenses had gotten so physical and that Bulls' team was so putrid that they didn't even crack 50 points.  No wonder there were big time hand-checking rule adjustments in 2003.  Thanks again Pat Riley and Jeff Van Gundy for setting NBA basketball back years. 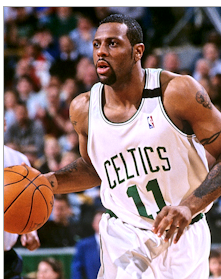 The Evil Emperor had a good idea in mind bringing him to Boston to tutor the younger players when he signed him in August of 2000.  But when the players tune out the coach, it's pretty irrelevant who you bring on board.   Brown played in 54 games for the 2000 Celtics, starting 35 of them.  He'd average about 23 minutes a night and 4.1 points.  Those numbers meant a lot more when he was winning titles with Jordan and Pippen.

I saw Brown play a lot on Chicago.  He was a tenacious defender and acted as a sparkplug for the Bulls.  He wasn't an all-star by any means but he was a very solid role player who played his role to perfection.  Some nights he wouldn't play since all the minutes would go to Ron Harper and Steve Kerr.  But when Chicago needed a defensive lockdown guy to really hound the ball, he was the guy to go to.  His offensive game was flashy with some impressive dunks but he could also knock down the occasional 17 foot jumper.  If Celtic fans associate instant-offense with Eddie House coming off the bench, then the best way to categorize Brown is instant defense.  There were countless games where he'd check in and right away there would be a deflection or a steal. 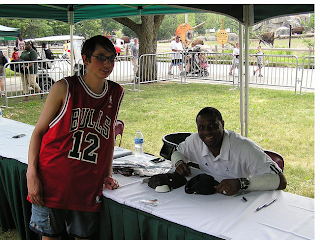 Looking back I totally didn't remember him being on Boston during the 2002 season.  He only played one game that year but was included in the Buffoon's wonderful move of shipping Joe Johnson for Rodney Rogers and Tony Delk.

For the past 3 years Randy has served as the Director of Player Development for the Bulls, which means he does things like going around Chicago with Bill Wennington displaying the championship trophies Chicago won. [Hate to end this on a tangent, but has anyone aged faster than Wennington?  When he was on the Bulls he was in his 30s and today he is 48.  Take a look first at this picture of him while playing.  And now this one of him retired.  Looks a lot older].  Hopefully this article takes off, and bumps down some of the negative press out there regarding Randy, which is really awful and undeserved.