What the Hell Happened to...Hank Finkel?

In this week of WTHHT, we remember 7 foot center Hank Finkel, who played with the Celtics in the 1970s.

Finkel was drafted in the second round of the 1966 draft (which actually made him the 17th overall pick at that time) by the Lakers.  After 1 season with the Lakers, he'd be drafted by the San Diego Rockets in the NBA Expansion Draft of 1967.  After Bill Russell retired following the epic 1969 NBA title, he was traded from the Rockets to the Celtics for cash.

I'm sure the Celtics weren't expecting Finkel to "replace" Russell by any means.  But Finkel would stay with the Celtics for the final 6 years of his career.  His best season, statistically, was his first season of 1970, for the 34-48 Celtics when Hank averaged 9.7 ppg in 23 minutes a night.  Once Cowens arrived the following season, Finkel was destined to be a backup. 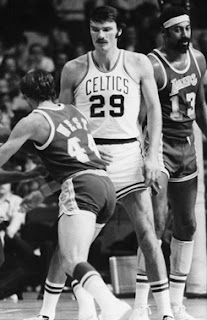 Hank would retire after the 1975 season with the Celtics, allowing him to be a part of the team that captured the 1974 title.

Hank apparently also went by Henry, which you can see on some of his basketball cards.

Today Hank sells office furniture in Woburn, MA, which is what he's been doing the past 25 years.  The name of his company is Hank Finkel Associates Inc, although word is he runs the business alone.  According to Hank he sells "desks, chairs, filing cabinets, storage bins, shelving, work benches and other things like that."   Apparently after Hank retired, he got in contact with old GM Jan Volk's dad, Jerry Volk who hooked him up with the job.  Hank claims he "fell into" this job; he had originally thought he'd be a teacher since his degree was in Education but he mentions when he was let go by the Celts it was November and all of the teaching jobs were filled.  Hank mentions how he still sells some things "door to door."  In the spirit of Rick Robey, who had mentioned his "basketball celebrity coming into play," Hank explains what it's like to do a sales pitch: 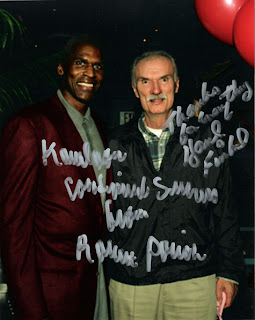 "About 20 years ago I was still fairly well-known. Now, I’ve got about three strands of hair left on my head, half of that is gray, my mustache is white but years ago people would welcome you in and then you talk more basketball than you did business. If they wanted something, it was an afterthought… ‘hey can you get me this or get me that’. Now it is all business and as the years go on the recognition declines. You really have to give them a sales pitch because half of them don’t remember you anymore. It’s the next generation coming up, that’s all."

Like Otis Birdsong, it would've been easy for Hank to complain about not playing in a later era where he wouldn't have had to work after his pro career.   Unlike Otis, Hank doesn't, and also seems humble in his take on today's game too.

Lastly since the Chief was 7'0 1/2, Finkel seems like he's just about the 7'0 he was actually listed at, based on his picture with Parish.