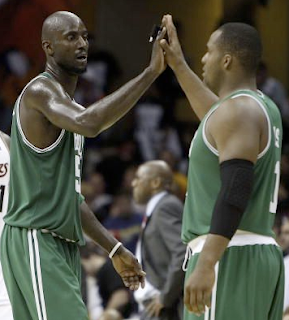 The Celtics always play Dwight Howard one on one, but Big Baby and KG brought the double team to dismiss his skills after holding him to only 6 points.

When you talked to Celtics players afterward, limiting Howard was not a surprise nor was it something they felt was overly impressive.

"I have been playing Dwight since 2004, when I was playing against him in the AAU circuit," Davis said. "His game hasn't really changed. It's not like has a jump shot, or a new spin move. He has the same moves since high school. He has the same post moves."

Kevin Garnett, a former league defensive player of the Year, didn't see the C's doing anything special against Howard, either.

"I thought everybody who guarded him did a good job on him," Garnett said. "It is not like he has a ton of moves. He is either going to jump-hook you, spin-lob … he is very predictable."

After a loss is never the best time to talk trash, but the truth is Dwight Howard and the Magic aren't going to beat a healthy Celtics team in the playoffs. In fact Davis said as much yesterday:


"They can't beat us," said Boston's Glen Davis after Orlando, well, beat them.

Davis clarified his words moments later by adding, "they came out and played better than us today, but if you are talking about a seven-game series, I don't think they can beat us."

If we're healthy in the Spring the only teams that could knock us off are the Heat (wildly underrated by Boston fans. It took them a while because of the egos, but they've clicked now) and the Lakers. I wouldn't bet against the Celtics against either of those two teams, but the Magic aren't even in the equation in my opinion.