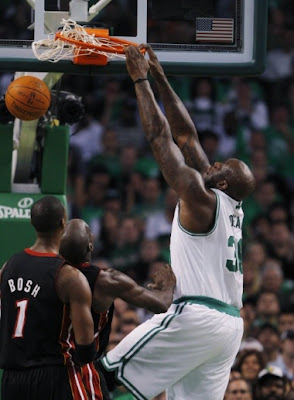 I must admit: I wasn't expecting big things when they signed him this summer.  To say my expectations have already been exceeded wouldn't even be an overstatement at this point.  I was anticipating him and Jermaine O'Neal to combine for a bit less than 95 games total and while Jermaine is doing his best to fulfill that prophecy, I've been thrilled with how seamlessly Shaquille O'Neal has fit in with the Celtics.  He's moving better out there than he did last season with Cleveland.    He's accepted his role to a tee.  And he's embraced the "Ubuntu" concept whole-heartedly.

I mean this when I say it (sorry FL!) but I believe he should remain in the starting lineup when Perk returns.  I'm no advocate of a player losing his spot because of an injury but the way I see it, unless Shaq gets injured, he should remain the starter.  Perk will be needed, specifically for Orlando and the Flakers, but Shaq's been great.  A rebirth beyond my wildest dreams.  He's doing this year what I expected Rasheed to do last year.  His offensive presence has been formidable.  His hands and ability to catch the bullet passes by Rajon and no-look feeds from KG has been admirable.  He's a factor in the paint and teams have to gameplan for his presence alone.

Perkins can and will get plenty of time still and with Glen Davis or Jermaine O'Neal and collectively, they should form the most imposing front line in the NBA.  And besides it really is more important who finishes the game (you'll notice Glen Davis this season generally finishes the game, not Shaq).

The Celtics are 15-4 right now and while a lot of credit goes to KG, Ray, Rajon and Paul, Shaq's gotta be mentioned.  This Celtic team is surpassing my expectations so far, and has allowed me to enjoy this season which I almost bypassed considering how last year ended.

Shaq's accepted his role of just playing and doing whatever the C's need in the way aging superstars so rarely do.  When he arrived I was anticipating a headache, a distraction, another ego for Doc to manage.  Almost 1/4th into the season and none of that is evident.  And I for one, am really impressed.