What the Hell Happened to...Todd Day? 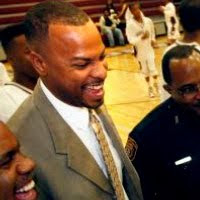 Not to be confused with Darren Daye, in today's WTHHT we remember Todd Day.  Day was an explosive college player who along with teammate Lee Mayberry, were known at the University of Arkansas as "Mayday."  Todd was picked by the Bucks with the number 8 overall selection back in the 1992 draft.

Despite not shooting higher than 43% from the field in his first 3 years, Day showed promise.  He didn't average less than 12.7 ppg in those first 3 campaigns and by the 1995 season he'd average a career high 16 ppg including starting 81 of 82 games for the Bucks.

However the next season after jut 8 games, he'd be traded along with Alton Lister to the Celtics for Sherman Douglas [Tangent time: I never understood those trades that happen a few games into the season- think Antoine Walker for Raef Lafrenz in 2003, Chauncey Billups for Allen Iverson in 2008.  It's like what the hell were you doing all summer and preseason that you couldn't finalize a deal before the start of the regular season?  Or are you all just buffoons like the dumbest general manager ever?]

Day would play for Boston in those dreaded 1996 and 1997 seasons.  He'd average 12 and 14.5 ppg those 2 years and he even tied Larry Bird's record for most points in a quarter by a Celtic (with 24) which he accomplished on December 22, 1995 vs the Timberwolves and Kevin Garnett.  [For some bizarre reason NBA TV showed this game as one of their Classic Games last year around this time].  Paul Pierce has also tied this record since then.

Todd's contract expired after that season with the Celtics and with the Evil Emperor coming onboard, there wasn't a shot he'd be resigned.  The rest of Day's basketball playing career was that of a vagabond.  Five games with Miami in 1998, 58 games with the Suns in 2000 (the only year of his career he'd make the playoffs) and 31 games with the T-Wolves in 2001.  He'd also make stops playing for the Arkansas Rimrockers of the ABA and the Harlem Globetrotters.

For his career he averaged 12 points and 3 rebounds in 483 games.

In my opinion Day just never lived up to his hype.  I was able to see him play in college and in the NBA.  And while he had his moments (like the Celtics' quarter scoring record) he was just never consistent enough.  Seriously if you look back, why couldn't Day have had a comparable career to Alan Houston?  It's puzzling.  Of course he did have a better NBA career than fellow Razorback Scotty Thurman (who I'm still surprised to this day never played in an NBA regular season game) but that's not saying much.  I feel Day had All Star potential.  I suppose the only two logical explanations are he was either in the 2010 Rasheed Wallace mode of CTC or I just don't know what the hell I'm talking about. 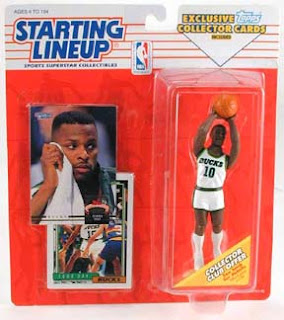 When I was younger, me and my brother used to goto NBA Summer League Games at the Westchester County Center in White Plains.  After one of the games Todd Day tossed my brother one of his game shoes.  He was playing for the Bucks in the Summer League that season.  Being a big Todd Day fan in college it was a really cool moment.

I actually think it'd be really cool if Todd Day still played today.  And if he could somehow play for the Nets.  And if the guy the Nets just signed, Anthony Morrow, well if his first name was Tom instead of Anthony.  Then you could say you're teammates of Todday and Tommorrow.  What an amazing experience.

After his playing career, Day was originally named the head coach of the Arkansas Impact of the PBL (Premier Basketball League).  They even had a dance team.  But when their inaugural season began, the Impact never were listed as a team and it's presumed they folded (no word what happened to the dance team).

Today Todd is the head high school boys basketball coach at the Memphis Academy of Health Sciences.  He coaches his son, Todd Day Jr.  Here's some highlights from one of their games earlier in the season where they lost to Todd Day's step father's team:


Maybe Todd Day Jr will be like Wayne Kreklow's son Ricky, and they'll both have WTHHTs written about them around 2035.