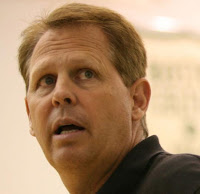 
Although Doc Rivers has said the Celtics get a lot of grief for a 50-win team, Ainge understands and even agrees with the criticism.

Ainge said he is not so supportive of the “turn it on in the playoffs’’ theory, despite the presence of the Big Three and their 2008 title. “It’s certainly rare and not anybody’s strategy,’’ he said. “It’s not a strategy from my standpoint. Not a strategy from Doc’s standpoint. So no, I don’t think that that’s the way to approach any season or any game.

Good to see Ainge not sugar coating things. Not sure what else to say here, but Ainge is usually pretty careful with what he says, so I thought I would share some his more candid comments on the Celtics disappointing regular season.