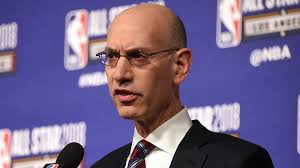 This week for what seems the umpteenth time, NBA Commissioner Adam Silver has openly expressed his disdain for what he prefers to call “intentional underachievement” and vowed to curtail the practice more commonly known as Tanking.
In a “mea culpa” meeting earlier this week with a large group of Phoenix Suns employees at Footprint Arena, he revealed that the league was studying the possibility of adopting the common European soccer strategy of “relegating” the league’s poorest performers to a lower level of play (presumably the G-League) while elevating the very best from that “lower” level.
The reports from the gathering seem to suggest that the Commish spent more time expounding on the inherent drawbacks to such a course of action, complications that would disrupt their “business model.”
Alas, a standard non-answer to a genuine concern about the quality of the product of the multi-billion -dollar business he oversees.
The reports of the meeting suggest that ol’ Adam was more succinct when addressing issues like media/network negotiations and expansion.
“Best Interests of the Game”
Way back in the ‘70’s, Oakland A’s eccentric owner Charley Finley decided to trade off all the stars from his multi-championship team before they deserted him (ala Catfish Hunter) in the sports world’s new-fangled free agency.
Commissioner Bowie Kuhn, exercising his authority to act “in the best interests of the game,” opted to void these transactions.
If similar “power” – he did facilitate the removal of Donald Sterling, no? – is available to Silver (in some form or fashion), there is one thing he can do to curb the menace of Tanking.
The league should stop allowing teams to trade draft choices with so-called “protections” – why would a team demand such protections if they didn’t want to retain the option to utilize them … and utilization involves ensuring a “poor enough” ranking so as not to lose a valuable pick, right?
These trade protections seem to incentivize at least some of this “intentional underachievement” that has Mr. Silver in such a dither. While they may have served a useful purpose when they arrived on the scene over thirty years ago, they no longer seem to be working in the Game’s Best Interests.
Simply outlaw the practice, also give teams a deadline (before the 2023 Draft, perhaps?) to re-negotiate any pending trade protections.
While this little operational adjustment may not end the scourge of the Tank Job, it would be a firm stride in the right direction by the powers-that-be … that’s you, Adam.
Related: The Draftsmanship of the Tank, NBA-style