Despite criticism, Celtics appear to have dealt with Udoka situation quite well 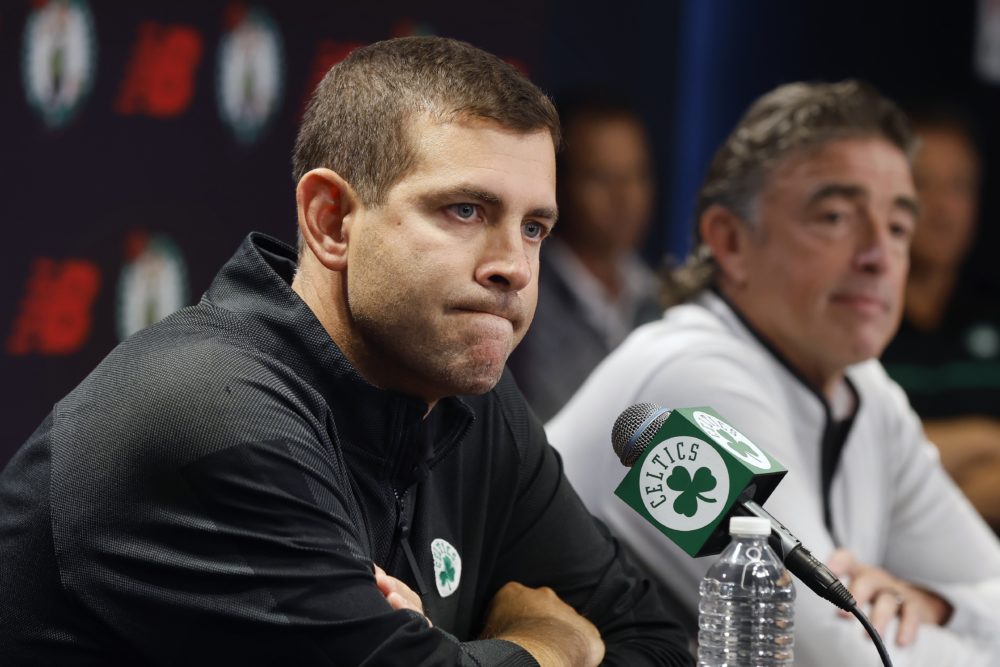 We live in a current society where people think either someone did nothing wrong and shouldn't be punished or they need to be cancelled forever. Quite the extremes. Since the news came out of Ime Udoka's "significant suspension," which then turned into a full season, we've either "A year is too harsh a punishment!" or "If it was bad enough to warrant a year suspension he should be fired!"

Brad Stevens stressed empathy today. Maybe instead of either a "slap on wrist" or "cancelled" extremes, a fair and lengthy suspension is the absolute right punishment. For all we know this suspension is the first step in the process to fire Udoka with cause. Or maybe, just maybe, in life someone can do something wrong and not receive the death penalty of consequences.

Ime Udoka himself has apologized and accepted the punishment. I know people like to complain, but in my opinion with the info we have available at this time, the Celtics seem to have handled this situation quite well. If there was a supposed consensual relationship between Udoka and a subordinate, the Celtics told him to cut it out and for it to not happen again. That was his one chance for it to stay quiet forever and to move on.

But then when it continued and escalated to unwanted comments (harassment) then it was time to have a full investigation which would lead to a fair punishment. There are certain things that Udoka could have done, where I would say he needs to be fired. Other things where I'd say he needs to be in jail and should never get another coaching job again. But without all the info there are things he might have done that deserve let's say a 10 game suspension. Others maybe a 40 game suspension. And others a full season.

It’s time to speak up on this matter and to my female coworkers, I see you and I am always here #womeninsports pic.twitter.com/c4RKu4HcxL

Sorry I know it won't be popular with all readers, but I hate cancel culture. It seems like an exaggerated overreaction where as opposed to just letting something go, you make sure to ruin someone's life forever. Yes people should have consequences. But they should also have a chance to reform, and try to do better.

Udoka did something bad enough to warrant a one year suspension. Does anyone think the Celtics would just suspend their coach that got to them to the NBA Finals just for nothing. You know they really preferred not to. They even gave him the opportunity to cut it out. The idea that the Celtics punishment of a whole season is racist, sets people fighting against racism back. That's asinine. The Celtics have never cared what color their coach is. They just care about winning.

So for them to suspend Udoka for a year took them stepping up and choosing to do the right thing over just caring about winning. We've seen pro teams time and time again, cover things like this up and only address the issue years down the road after ESPN or Bleacher Report or someone discovered them.

The Celtics were proactive. They weren't like the Clippers, Suns, Mavs, Knicks or any of the other organizations that had issues in the past. The fact that people want to blame the Celtics for this is just another mark on current society. People complained that they need to "Say something! Say Anything!" yesterday. Oh yeah, because making a quick decision just to appease the masses always is the right move in long run right?

Also clearing 1 woman on staff would put added targets on the remaining women on staff. https://t.co/oyVGvKaHTf

Then you had reporters like Gary Washburn demanding the Celtics put something out to let the Twitter mob know the woman that had an affair with Udoka wasn't Allison Feaster. Another dumb idea. So basically he wanted the mob to strengthen their attacks on the remaining Celtics female staff members. Clearing one woman's name just would leave the rest of the women in a worse situation.

You also had people demanding that the female's name be disclosed and that she needed to receive the same punishment. First of all, if you are the subordinate in a "consensual work relationship" you don't have the power. The rules are made to prevent people in higher positions from preying on people underneath them.

Second of all, Udoka will be coaching another NBA team as soon as this season. He will put this past him and move on. The women in these situations always get the worst of it even though they are the victims.

If the Celtics give the mob a name, then fans will have a name to attack with their "whore" and "It's your fucking fault we lost our coach" vitriol. They will have this hanging over them for life. They don't get to move on like Udoka would. The Celtics did the absolute right thing not disclosing the name of the woman or going into specific details.

.@stephenasmith: Ime Udoka should be fired or Celtics handle it internally. The woman should be named, disciplined too since it was consensual@Meghan_Ottolini: “What Stephen A is asking for is impossible”@LouMerloni: “He’s uniformed … I can’t even listen to that man anymore” pic.twitter.com/574SYcBqFa

Here's what I tweeted on this late last night:

So much of what I’m seeing online is why women way too often don’t report sexual harassment, pretend it’s ok or say it was “consensual”

B/c when they do report it, the pitchforks come out.

Why should the Celtics disclose the female staffer’s name? So the mob can get their 2lbs?

People aren't entitled to their pound of flesh because they lost the coach of the team they root for. Everything that has happened the past few days shows why it's so much easier for a woman not to report sexual misconduct. They get put through the ringer. If Udoka would have just stopped in early Summer when it first became known, the victim would have been much happier. When she decided to later this summer report the further violations/comments, she knew who were life was going to change for the worse.

Miles Bridges' wife reported his abuse right before he was about to get a max contract, and he, her, and their kids would have generational wealth. She doesn't get enough credit for doing that. She gave up tens of millions of dollars for her and her kids just to stop an abuser. Women have to make these tough choices to stop predatory men. The women always lose something for doing the right thing. Kobe Bryant is looked up to as like a god to so many fans while his rape accuser was forever labeled a whore. Bill Clinton remained president while Monica Lewinsky's lost everything and was the butt of jokes for decades.

And you know me. I will call the Celtics out when they are being cheap, pandering, or make a poor roster decision. I'm not one of those fan boy bloggers. But they deserve credit in this situation for dealing with it the moment it was brought to them, and then dealing a swift punishment when they heard it continued and escalated.

“We have a lot of talented women in our organization and I thought yesterday was really hard on them. Nobody can control Twitter speculation…rampant bullshit…but I do think we as an organization have a responsibility we're there to support them now" pic.twitter.com/GUVHvpxaXK

Udoka never coached another game for the Celtics, post accusations. And the Celtics did the best they could to protect all their female staff members this summer and week. This summer, by having the Udoka situation investigated, and this week by not listening to reporters and the masses who wanted names and details.

Allison Feaster didn't deserve to get her name put into this, but neither did the less accomplished women. It made me sick to read Washburn's demand for the Celtics to clear Feaster and put targets on the less established women in the Celtics organization.

And with regards to Udoka, they appear (at this time) to have levied a sanction that fit the infraction. You don't have to cancel someone. You do need to hold someone accountable. There's a difference. And with regards to new coach Joe Mazzulla's issues that he had way back in college, I trust Brad Stevens when he says that Mazzulla's grown from them and is a better person now.

Again, the choices aren't just the extremes of no punishment or "cancelled for life." Stevens wouldn't replace Udoka, especially after this situation, with a bad man. I trust the many years that Stevens has worked with Mazzulla to evaluate him. He deserves this chance, despite his past transgressions. Just like Udoka deserves another coaching gig down the road after he's hopefully grown as a man from this (again assuming no new info comes out that makes his violations much more heinous).

Stevens stressed empathy. Maybe instead of either "slap on wrist" or "cancelled" extremes, a fair lengthy suspension is the absolute right punishment

And leave all the women who work in the Celtics organization alone, even whomever you think was the woman who had an affair with Udoka. Trust me, she's been through hell this summer dealing with this, especially this week. And this will only hurt her career moving forward, besides the harm that it did to current relationships.

Punishing this woman any more is obscene. And I'm glad the Celtics announced that Udoka was the only one to be punished. The woman should get credit for being a whistleblower, despite knowing the shit that it would cause to her life if the Celtics decided to suspend Udoka.

Maybe if we support subordinates more in these workplace sexual misconduct situations they will be more likely to actually report incidents. And that will lead to less incidents, which would be a good thing for all.