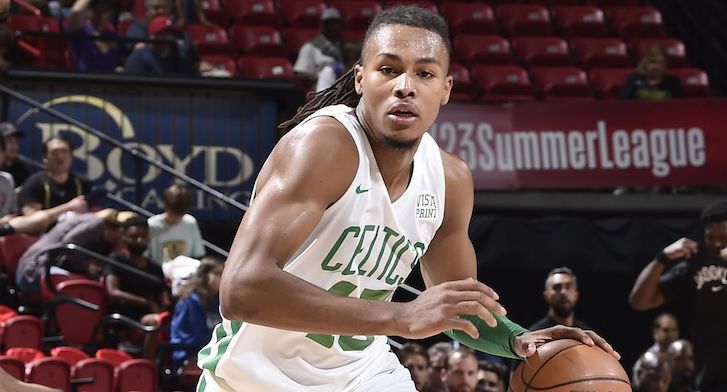 According to a league source, Celtics 2021 second-round draft pick Juhann Begarin will return to Paris this season to continue his development in France's top league, LNB Pro A.
Begarin, who turned 20 last week, had a strong showing in Vegas.

Juhann Begarin has showed an athletic skill set the past two summer leagues, but he will not be battling it out in training camp for one of the last Boston Celtics roster spots. Instead he will head back to Paris, France to play another season in his home country.

The Celtics will keep an eye out on Begarin this season with a hope that he will develop a more proficient jumper. In my opinion, if (or when) he does that, he has the talent to be a rotation player in the NBA.

My guess is that the Celtics other draft and stash player, Yam Madar, will also play another season overseas. With the Celtics adding Derrick White at last season's trade deadline, and then Malcolm Brogdon this offseason, the Celtics point guard position has some very heavy depth.

I still have hope for Madar as well. Maybe it's simply because the Celtics have had such a futile history of drafting international talent compared to the rest of the NBA,so I'm just trying to will a 2nd round find to mirror other teams' success? Madar and Begarin are both very young still, so don't take their exclusion from the Celtics roster as meaning they have no futures in Boston.