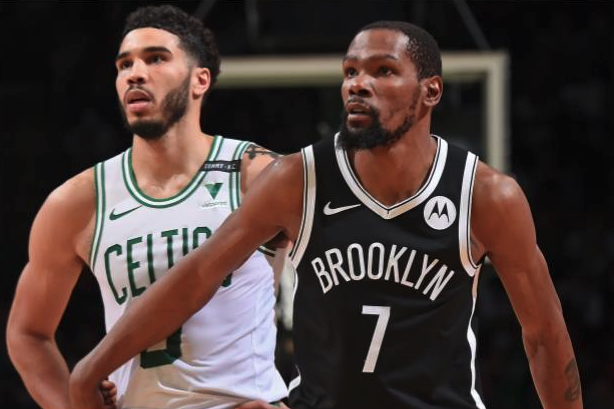 The Boston Celtics are reportedly still strongly in the mix for Brooklyn Nets superstar Kevin Durant, who requested a trade from the organization more than a month ago.

According to Shams Charania of The Athletic (subscription required), Durant met with owner Joseph Tsai on the weekend and made it clear that he’d still like to be traded.

The future Hall of Famer “reiterated his trade request and informed Tsai that he needs to choose between Durant or the pairing of general manager Sean Marks and coach Steve Nash” during the meeting, according to Charania. Tsai took to Twitter and stated that the Nets’ coaches and front office “have my support”, and that they “will make decisions in the best interest of the Brooklyn Nets.”

It was also noted by Charania that the Celtics, Miami Heat and Toronto Raptors “remain the most significant candidates to acquire Durant.”

In a major development, Massachusetts legislators finally agreed on a sports betting bill that could lead to the launch of legalized sports gambling in the state before long. The hope is that betting will go live by the end of 2022 or early 2023.

If it launches, fans in Massachusetts could place different types of wagers that include parlays, futures, point spreads and more. For what it’s worth, the Celtics are the main betting favorites to win the 2023 NBA Championship at multiple sportsbooks, including FanDuel (+450) and DraftKings (+450).

On July 24, ESPN’s Adrian Wojnarowski reported that Boston “engaged in talks on a possible deal” for Durant. Charania reported at The Athletic on July 25 (subscription required) that Boston offered All-Star Jaylen Brown as part of a trade proposal for Durant.

The Celtics put up an admirable effort against the dynastic Golden State Warriors in the 2022 NBA Finals, but the more experienced and deeper Dubs were simply too much for the Jayson Tatum-led C’s to overcome.

Boston’s stingy defense had no answer for Stephen Curry. Andrew Wiggins was a two-way star who played grade-A defense on Tatum, and Draymond Green once again did his job at both ends of the floor.

Tatum’s struggles in the six-game series has been well-documented. He struggled with ball control and shot a woeful 36.7 percent from the field. He was held to 12 points in Game 1 (a Boston victory) and 13 in the decisive Game 6.

But that was two months ago, and Tatum knows that he has to keep his eyes and focus on the future. The 24-year-old phenom knows that there are plenty of valuable lessons to learn from following the most painful defeat of his career.

“(I learned) that I’m 24 and one of the best players in the world and that I will compete against whoever and take on that challenge,” Tatum said in an interview with Jared Weiss of The Athletic (subscription required). “In that same breath, I feel like there’s so much I could be better at, and I think that’s the exciting part. That I’m at where I’m at, where there’s so much more I can be, so much more I can learn and so many more experiences to go through.”

If Boston gets back to the Finals in 2023, Tatum will certainly be a key reason why. And the lessons learned from the loss to Golden State will have helped tremendously.

It’s very tough to predict how the East will play out until/unless the Nets trade Durant. And if he’s dealt to a team within the conference, the landscape of the East changes dramatically.

But based on the current outlook of the conference, the Celtics are in good position to finish as a top-two seed once again. The Nets will likely be worse without Durant, and the Miami Heat (last season’s top seed) still haven’t made a splash to help close the gap with Boston.

As it stands, the Milwaukee Bucks are the only team in the East that you can argue are better and all-around deeper than Boston. After all, Milwaukee pushed the C’s to seven games in the second round despite lacking All-Star Khris Middleton for the entire series.

Giannis Antetokounmpo is the best player on the planet. When he has Middleton and Jrue Holiday on the court, Milwaukee is a force on both ends of the court.

Until Durant is traded, it looks to be a three-way battle between Milwaukee, Boston and Miami for the top seed in the East. The early prediction is that the Bucks will claim the top seed by winning 57 games, and Boston will be just behind with a 54-28 record.