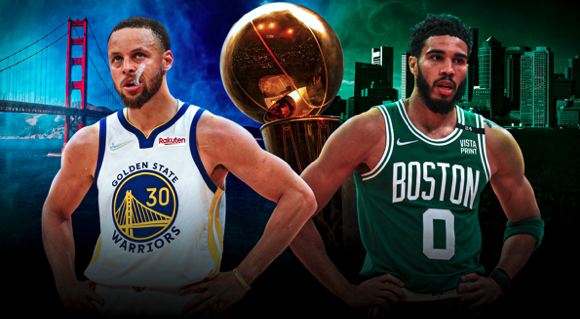 Having won his first NBA Championship ring with the Warriors last week, it's no wonder that Andrew Wiggins would love to stay with Golden State long-term.

“I would love to stay here," Wiggins told reporters on Saturday, per ESPN’s Kendra Andrews. “The way they treat the players ... we're all one big family. I feel like a lot of places may say that, but they show it through their actions.”

The Toronto, Ontario native became just the eighth Canadian-born player to win an NBA championship ring, and the first since Chris Boucher won his second with the Toronto Raptors in 2019 (he also won a title with Golden State in 2017).

Wiggins wasn’t the only vying for a championship in the finals. Mississauga native Nik Stauskas joined the Celtics on a two-year deal in March.

The 28-year-old veteran saw limited time in the finals, playing just nine minutes over five games. Before joining the Celtics, the No. 8 pick of the 2014 draft played for the Grand Rapids Gold of the NBA G League as well as two games for the Miami Heat.

Basketball fans in the US can place all sorts of different bets through BetMGM, including moneylines, parlays and futures (NBA Champions, division and award winners, etc.). The Warriors are the early betting favorites to win the 2023 championship at multiple major sports betting apps.

It’s safe to say that without Wiggins’ remarkable two-way play throughout the postseason, the Warriors wouldn’t be celebrating their fourth NBA championship in the “Splash Brothers” era.

Aside from chipping in with timely offense, the No. 1 pick of the 2014 NBA draft played incredible all-world defense throughout the playoffs. He notably limited Boston Celtics’ All-Star Jayson Tatum, who greatly struggled in the final three games of the series.

Wiggins is eligible to enter free agency after next season. He’s definitely done enough to earn a lucrative extension from the dynastic Warriors, but GM Bob Myers will certainly have to perform quite the series of cap gymnastics to make it work.

Ime Udoka’s Message To Celtics: “Let’s Not Be Satisfied”

The Celtics greatly exceeded expectations under first-year head coach Ime Udoka, but he doesn’t want his players feeling “satisfied” heading into next year.

Udoka has been on both the winning and losing sides of the NBA Finals. He was an assistant with the San Antonio Spurs when they won the NBA Championship over the Miami Heat in 2014 — one year after that same team defeated the Spurs in a thrilling seven-game series.

Per Ira Winderman of the Sun-Sentinel, Udoka cited the 2013 series loss to Miami as motivation for the Spurs. He hopes these young Celtics can also learn from the devastating series loss to Golden State and use the pain to propel them next year.

“Obviously, losing on a buzzer-beater against Ray Allen when I was in San Antonio will kind of fuel you throughout a whole season,” Udoka said. “But this was a little bit different. We improved in a lot of areas, but fell short of our ultimate goal. Some guys didn’t play their best. That’s going to motivate guys throughout the season

“Like I said, the message is everybody come back better. Let’s not be satisfied. It’s not guaranteed you’re going to be here. The East is getting tougher every year. They’ll come back better. We will as a staff, as well.”

Udoka is certainly right about how a trip to the finals isn’t “guaranteed”. The Kevin Durant and Russell Westbrook-led Oklahoma City Thunder never got back there after losing to Miami in 2012. Joel Embiid’s Philadelphia 76ers and Durant’s superteam Nets still haven’t reached the finals, after all.

Udoka took over a team that finished a disappointing 36-36 in 2020-21. They were no match for the star-studded Brooklyn Nets, who eliminated the overwhelmed Celtics in five games during opening round play.

After the season, then-head coach Brad Stevens moved up to the president of basketball operations role, and Udoka was hired to replace Stevens’ previous position.

Boston certainly didn’t look like a contender early in the new year, when a Jan. 6 loss to the New York Knicks dropped them to 18-21. At the time, it was practically impossible to envision that the Celtics would go on a red-hot second half run that would take them all the way to the NBA Finals.

But thanks mostly to a stingy defensive system implemented by Udoka, the Celtics just kept on winning and winning. After defeating the powerhouse Nets in round one, the C’s eliminated the defending champion Milwaukee Bucks in round two.

Boston narrowly outlasted a resilient Miami team in the Conference Finals to reach the NBA Finals for the first time since 2010.

The Celtics certainly gave Golden State all they could handle. But at the end of the day, the Warrior’s legendary trio of Stephen Curry, Draymond Green and Klay Thompson couldn’t be denied another title. For Boston, Wiggins’ elite two-way play and the contributions of Jordan Poole also didn’t help matters.

The C’s now anxiously await the start of the 2022-23 season as they build off a thrilling year that ended in ultimate heartbreak.