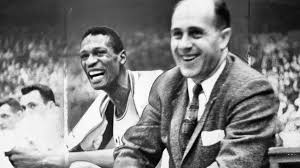 A mere eight days after the GOAT (along with his coach and all but one of his teammates) won his/their very first professional championship, this happened.

And here’s the story (well, the beginning of Michael Hamel’s accounting of the NBA life 65 years ago):

On Saturday afternoon, April 13, 1957, the Boston Celtics captured their first NBA Championship by defeating the St. Louis Hawks 125-123 in double overtime. The next day, most of the Celtics flew to Des Moines, Iowa, to begin a 21-game tour through the western United States, Hawaii, and British Columbia, bringing their sport to cities and towns that did not have a pro basketball franchise of their own. One member of the Celtics chose not to fly: Bill Russell had just bought a new Chrysler Imperial and insisted on driving it back home to San Francisco as the tour made its way west. He reportedly covered the 1324 miles from Boston to Des Moines in a crisp 23 hours.

Abacus Revelation for the Road
Any guesses on the identity of the lone Celtic who'd already won an NBA championship?
Hint(s): One of his teammates on that early title team was the only guy who’s ever coached the woe-begone Knicks to a championship …
... and the owner/coach of those early-50’s champions is the guy to whom Walter Brown “allegedly” traded the Ice Capades so he would not select the GOAT with the first pick in the 1956 NBA Draft.
Final Thought / Word of Caution -- click that "Michael Hamel" link above at your own risk, the gentleman's extraordinary work is addictive.