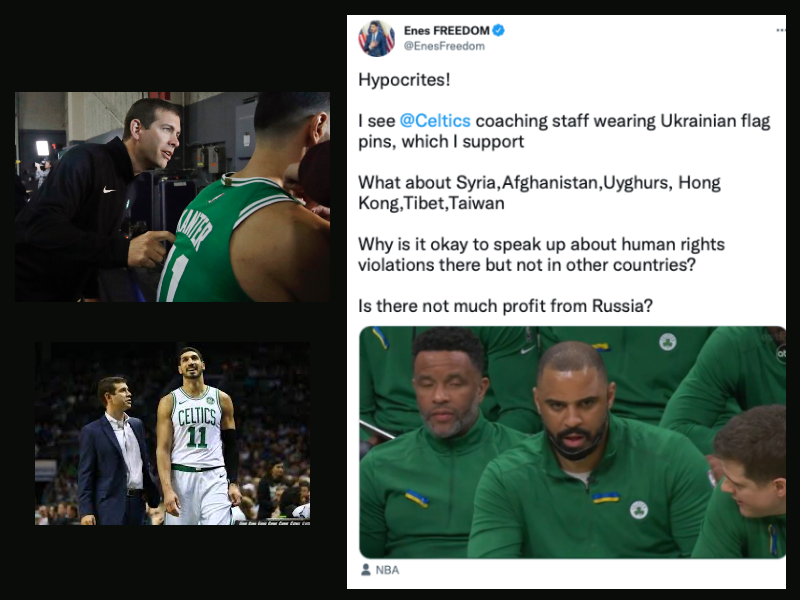 Don't expect to see a third Enes Kanter Freedom stint with the Boston Celtics. While the recently traded center, talent wise, shouldstill be able to find a home in the NBA, despite the modern game passing his skillset by, there are no guarantees there. In fact if I was a betting man, I'd venture to guess he may have played his last NBA game.

Freedom who has never been shy to call people out, took shots at the Celtics on Sunday for what he called hypocrisy.

How is it fair when I wore shoes to bring awareness about Human Rights violations around the world, @Celtics begged me to remove them and threatened to ban me, #Celtics now wear Ukrainian flag pins.

Who approved this @NBPA / @NBA?

Who chooses whose lives are more important? https://t.co/NT8daMNB4e

Let's get something out of the way first. Since I can't stand hypocrisy either, I'm not going to sit her and now attack or bash Freedom when I supported his previous criticisms of LeBron James, the NBA, and China. Freedom has always been correct that the NBA and its franchises and players turn a blind eye to human violations when it comes to China because of all the money that would be lost.

Too often fans idolize players not just for what they do on the basketball court, but for how they receive them off the court. Charles Barkley said it best when he stated he was not a role model.

People tend to stand up for issues that affect them and their community, as you saw with NBA players following the killing of George Floyd. Then people also will stand up for other causes that are popular or won't cost them. The NBA promoting Black History Month, International Women’s Day, or LGBTQ+ causes are some examples.

Are NBA locker rooms, LGBTQ+ friendly? Absolutely not. I even got in a recent DM conversation with a fairly recent NBA player who still brought up the issue of players feeling uncomfortable with a homosexual player in the locker room. There are currently zero NBA players that have come out as anything other than heterosexual. So a lot of support that NBA players and teams give is just for show.

Now with the Ukraine issue, the Celtics are doing right by show support to Ukraine. And if the whole team had worn Enes Freedom's sneakers in solidarity with him and to support those nations dealing with human rights violations, that would have been fantastic. But they all would be risking losing out on a lot of money if China went nuts over the gesture, and most people aren't that selfless.

So yes in a way the Celtics are hypocrites and so is the entire NBA. So is Nike, Apple, etc. It doesn't mean supporting Ukraine isn't a good thing, it just means it's a cold world out there. And most people only take up causes that benefit them (or don't hurt them). Sometimes the love they get for supporting a cause is the benefit. Sometimes its financial.

I like Kanter Freedom and his willingness to stand-up to things that could cost him, but there is also an added benefit for him there in that he's become famous for this. He will stay in the limelight past his playing career. I'm not saying Freedom isn't being genuine. Just saying there is always a possibility.

As for the Celtics, hypocrites or not, they are no different than all the rest of the NBA teams and owners. They don't want to lose the cash cow that is China revenue. Daryl Morey and Enes Freedom sit alone fighting that. But even Morey may have been warned to tread more carefully if he wants to remain in the NBA. It's a sad reality, but the NBA and is a multi billion dollar business made up of billionaire owners and millionaire players. Like most multi billion dollar businesses, they put money first. No owners just let everyone come to the games for free and no players play for free.

The NBA is a business and when they stand for something or against something, you should take it no different than when a company like Netflix emailed you in June of 2020 to tell you how much their company supports Black people. These are business decisions with some humanity thrown in. I'm sure players and coaches do care about the people losing their homes and loved ones in Ukraine. And they still care when China is the perpetrator on another group of people. They just might not show that concern, which is sad.

I believe Freedom that he was asked to not wear his sneakers, but I also believe Stevens that that order didn't come from him.

“Here’s exactly what happened. I was actually at home, and when he decided to wear the sneakers, there was some concern – and I didn’t even know until the end of the first quarter — that there was a potential uniform or dress code violation. I don’t know what was said – I can’t imagine that phrasing was said — but the question to me was what to do about Enes’ shoes.”

“I said I think that he’s fine, and let me double check with the NBA to see if there’s any uniform violation. Double-checked, fine, and he wore those the rest of the game and he wore whatever he wanted the rest of the year. It’s interesting, because I feel really good that we truly sat here and supported him and his right to express himself and his freedom of speech, and I even told him the next day that you know I’ve always done that.”

“We didn’t talk about anything after that, because we weren’t checking from that point forward. Wear whatever you want."

Freedom's beef previously was that the Celtics didn't openly back him. That there is a difference between saying we support your right to express yourself and your feelings and saying we stand with you. I would have preferred the Celtics to show more support to the human violations that Freedom was protesting, but I'd also prefer Nike and Apple to not turn a blind eye to China either.

At the end of the day, it's important to again as Barkley said, not treat NBA players or celebrities as role models. And when you actually see someone give up a lot for a good cause and they aren't doing it for ulterior motives, you should appreciate them more.