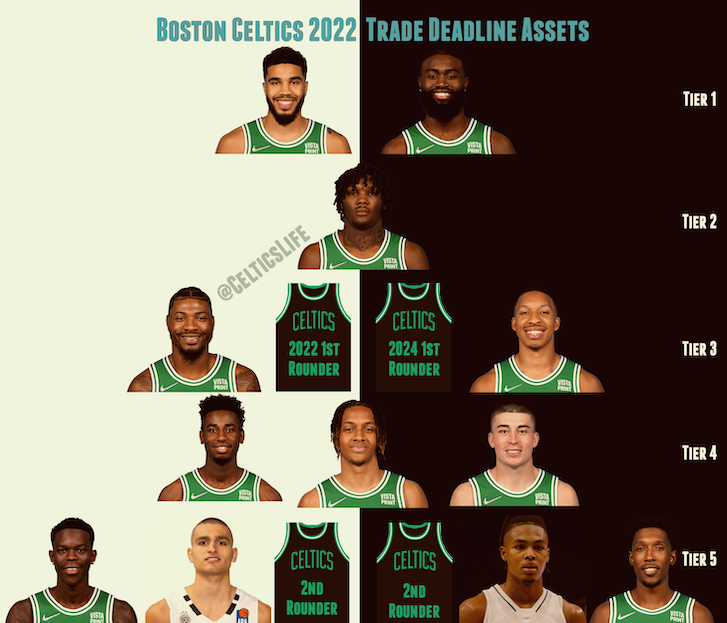 A promised here is our annual trade deadline assets pyramid. The trade deadline is seventeen days away and thing could change, but this should give a good idea of what the Celtics have asset wise if they want to make moves.

A few notes to keep in mind:

1. This is how players are valued to other teams based on skill, age, and contracts. It's not just about skill! Otherwise, Al Horford would be included.

2. While fans of every team tend to overrate their own players and underrate faceless future draft picks due naturally to attachment, every GM values 1st round draft picks as top assets. Players values can escalate and deescalate and count to the salary cap. Future 1st round picks will always have a strong positive value.

3. Not every asset in each tier is equal. For example, Jayson Tatum has more trade value than Jaylen Brown, but both are included in the same tier.

4. Players with negative trade value, no trade value, or less thn a 2nd rounder trade value aren't included. How that is tested is if the Celtics placed said player on waivers right now, would another team pick the player up? (More further down) 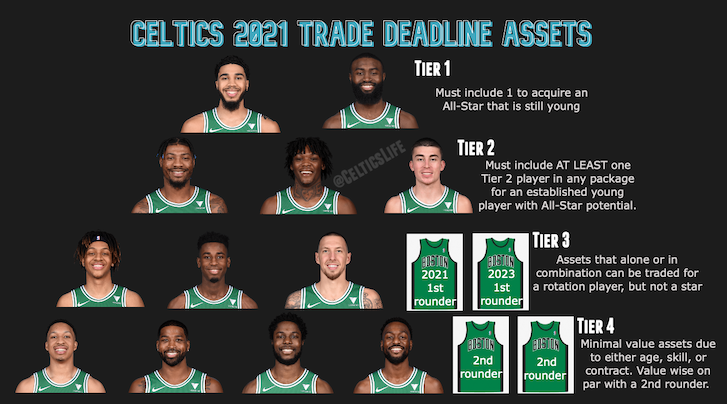 For example of th 4th note and so no one gets triggered, Al Horford, who's a player on the Tier 3 level skill wise, due to his age and contract, no team would pick him with said contract off waivers. He is thus a negative asset. Teams trade big money, negative asset contracts all the time, but they either are aquiring a negative asset back, or including a positive asset to offset the negative.

We put Kemba Walker on the bottom tier last season and people thought that was disrespectful, but by the offseason it turned out he had moved into negative asset territory. If anything, we were too kind to Kemba last year, since if Boston had waived him at the deadline no one would have picked him up (again due to contract and age).

Boston ended up having to trade a positive asset of a mid 1st round pick and take on a lesser negative asset to unload Kemba. Due to Al Horford's less guaranteed money final year on his contract for 2022-23, he's much less of a negative asset than Kemba had become by last summer. Come this summer though, I believe his value will still just be around Tristan Thompson's from last year.

Thompson was unloaded for contracts which made a little less than him. So Tristan also had become a negative asset by the summer. Barely negative, but still negative. IF Brad Stevens could have traded Thompson for nothing (meaning no contracts back, he would have preferred that.

The Celtics most recent trade was that of a minor negative asset in Juancho Hermangomez. Boston acquired a couple injured players making less than Juancho, but would have preferred getting no players back.

Why are Tatum and Brown on the same tier?

Arleady answered that above. Yes on a list of 1 to 15, Tatum would be #1 and Jaylen would be #2, but we're doing tiers. If you want to trade for a Dejounte Murray, Ben Simmons, Damian Lillard, Bradley Beal, or Tyrese Haliburton, you need t9 part with one of these guys. Reports are neither will be traded prior to the deadline.

Why is Marcus Smart on the same tier as first round picks and garbage Grant Williams?

Well for one, Grant Williams isn't garbage. He's a solid stretch 4 who likely could be traded for another team's 1st rounder. He's also younger and on a more team friendly contract than Smart.

Smart is currently the better player, but asset lists take into accounts age and contracts. The Celtics have considered trading Smart a few times in the past year and his value always comes back as "You could trade him for a 1st rounder, but not a lottery pick, or if one, a late lottery pick."

Smart's now older and on a hefty contract, so his value is likely a bit lower, but teams still want him for sure. It should be noted that Smart could be traded for a better player or better draft assets if the Celtics took back a bad contract in the deal.

Could you trade for a star with Robert Williams?

Short answer is no. Now if you're talking an older star who a team might want out of his contract, then maybe. but I wouldn't go that route if I were Boston. Williams and multiple 1st rounders for a young star? No he's not at that level yet and our picks aren't that attractive. A team like Portland could likely trade Time Lord with picks for a young star, but that's because they appear to be tanking this year and their 2022 1st rounder has great value because of that.

The Celtics reportedly are not making Time Lord available in trades right now either. He appears to me on their somewhat untoachable list with the Jay's. The Celtics can always change their minds if they get an offer they can't refuse, but don't expect them to move him.

Yes really. Again all three could become very good players, but if you asked another team if they'd prefer Boston's 2002 1st or one of those guys, they's all choose the picks. 1st round picks are gold. When a player is in the league and has yet to break out, they actually have lost value. It's like a how a new car loses value after it leaves the lot. Well that always happens, while young draftees can gain more value than their draft position. See Haliburton for example.

Schroder and Richardson on par with draft and stash 2nd rounders and future 2nd rounders?

Yup. Boston doesn't have Schroder's Bird rights and neither would any team trading for him. He's more or less a rental. You're not getting a 1st round pick for him. You could argue that maybe you can get another team's equivalent to a Nesmith, Langford, or Pritchard, and maybe you're right, but more or less Schroder trade value is that of a 2nd rounder.

This is part of the reason, I didn't understand why the Celtics were getting so much praise for the signing. Yeah it was a no brainer in terms of a one year rental, but this team needs foundation pieces, not rentals. If the Celtics get offerfed two 2nd rounders like the Magic got for Evan Fournier I believe they take that deal. Would also include some contract back that Boston could sell to the fans. Think this year's Luke Kornet.

Josh Richardon is a hard player to peg value wise. Dallas obviously couldn't find anyone willing to trade an asset for him. Then Brad gave him an extra year on his deal making his trade deadline expiring deal less valuable than let's say Schroder's. But he's kind of had a bounce back year and I don't think the extra year on his deal changes his value much.

You still couldn't get a 1st rounder back for J-Rich, but he's not a negative asset.

If this looks bleak, remember you can always get more back if you're willing to take on a bad contract. That's how Oklahoma City was able to get a 1st rounder for Horford. Also, most trades aren't 1 for 1. Most consist of some combination of picks and players.

The Celtics do have some options if they want to upgrade, but I wouldn't have too great expectations of a major upgrade happening this trade deadline. That's because the Celtics are making it a priority to get under the luxury tax and most trades that would significantly upgrade the team wouldn't allow that to happen.

The Celtics don't have bad owners per se, but they are actually at the bottom in terms of wealth (compared to other NBA ownerships), so they aren't like the many uber rich owners who prioritze winning over everything. That made life harder for Ainge and will for Stevens as well. The somewhat good news is they were willing to pay the tax back in the KG days, so if Stevens can prove to them that Boston has a legit contender at some point, they will likely go into tax territory.

It's an obstacle for sure and personally I think since owners make such a killing when they eventually cash out and sell teams that they should prioritze winning while they own the teams. And it's not like being a tax team will make you have to sell your car, boat, or house. At worst, you might have to wait a bit on that seventh house. But different owners view owning a team differently. Some look at as a passion project and others balance winning with making the most money.

You're not going to get as competitive a team as if Mark Cuban or Stev Balmer owned the Celtics. It's important to remember these contraints when evaluating Stevens' moves. He can't simply trade a draft pick and a TPE for a good player to add to this team. To do that, he would then have to unload contracts elsewhere, similar to how Ainge had to give away Daniel Theis, Javonte Green, and Jeff Teague last year to accomodate Evan Fournier's contract and the budget restrictions he was under.

We will have a trade deadline predictions post up on the site to accomodate this one in the coming days. Feel free to use the pyramid as a reference if any of your less knowlegeable Celtics fans come up with unrealistic trade ideas.