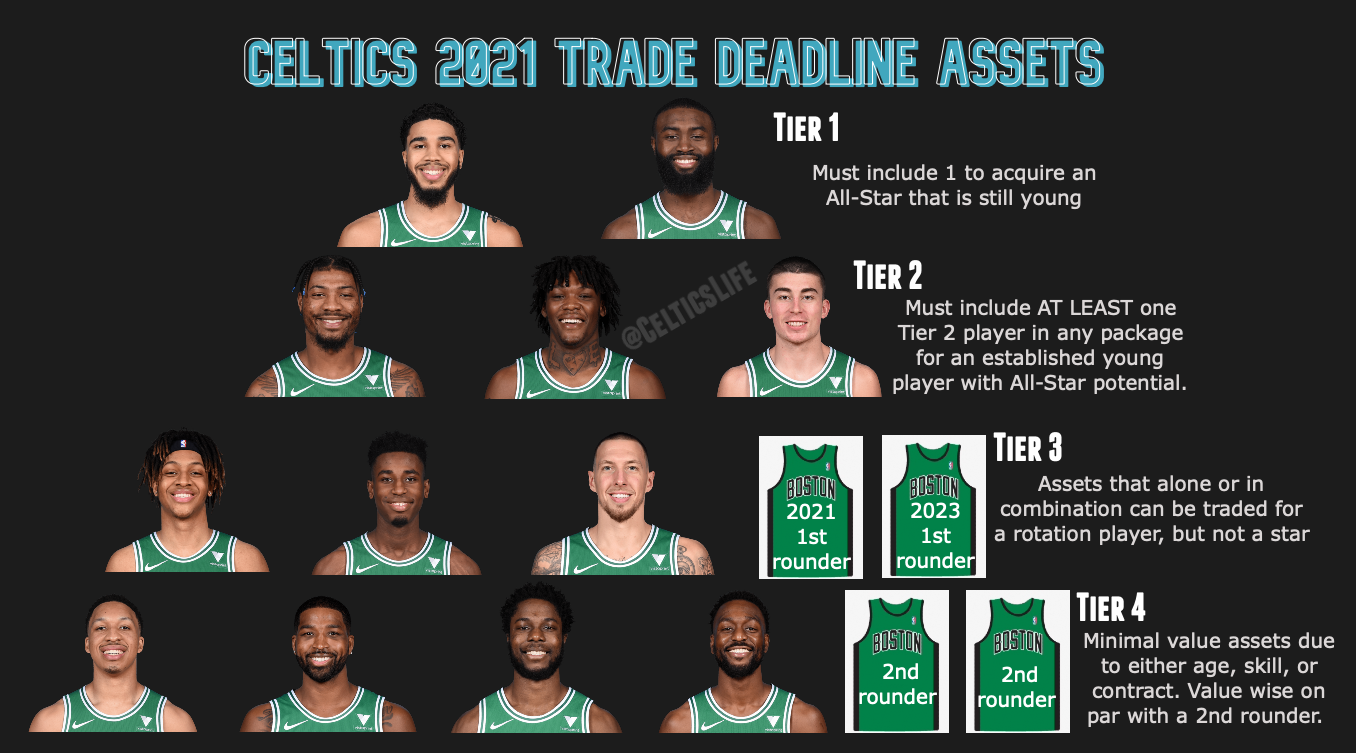 With a week to go before the NBA trade deadline fans are hounding Danny Ainge to make a trade that will make the Celtics contenders. The expectation is that if this Celtics team gets bounced in the Eastern Conference Finals or earlier they are a failure and Brad Stevens must go and maybe Ainge as well. To be honest once the team let Kyrie, Horford, Rozier, Morris, and Baynes go they ceased being legit contenders in my eyes. But the Jay's took a leap last season, Ben Simmons was out for the playoffs, the Bucks fell apart after the hiatus and the Celtics made the Eastern Confefence Finals.

I believe if Gordon Hayward had been healthy, Boston gets past Miami and makes it to the Finals and then anything can happen, but considering both Kemba and Theis were also hurting by the conference finals, Boston would have been a significant underdog vs. L.A.


As the rest of the league reloaded this offseason, the Celtics would need to improve to still have a shot at the Finals this season. When Gordon Hayward walked for nothing that window closed. Danny Ainge even admitted recetnly that the roster as constructed is not a contender. Boston needed to add something to the roster with Hayward, not subtract.

If Brad Stevens gets this team into the Eastern Conferfence Finals he's earned every penny. Means they overachieved. So with the expectations of Finals or bust, I created this asset pyramid so people could have a relaistic idea what and who needed to be traded to improve the roster. Players and picks are on different tiers for different reasons. Besides talent and potential, contracts and age matter, so players like Time Lord and Pritchard have more value than Kemba Walker.

Honestly Kemba is the hardest to include, because you'll find many people that think Boston would have to trade a 1st or 2 just to dump him. That's not the type of trade you make at the deadline anyway. You make that trade in the offseason and personally I'm against ever including a 1st to dump a player unless you need to immemdiatly create cap space to add a superstar on the first day of free agency. Boston would be better off holding on to Kemba than trading 1sts with him, but I expect when Danny does trade Kemba either this summer or next season he won't be including a 1st. It will be some trade where Boston gets back another high paid player that another team wants to trade. Something like the John Wall for Russell Westbrook swap this past off season. 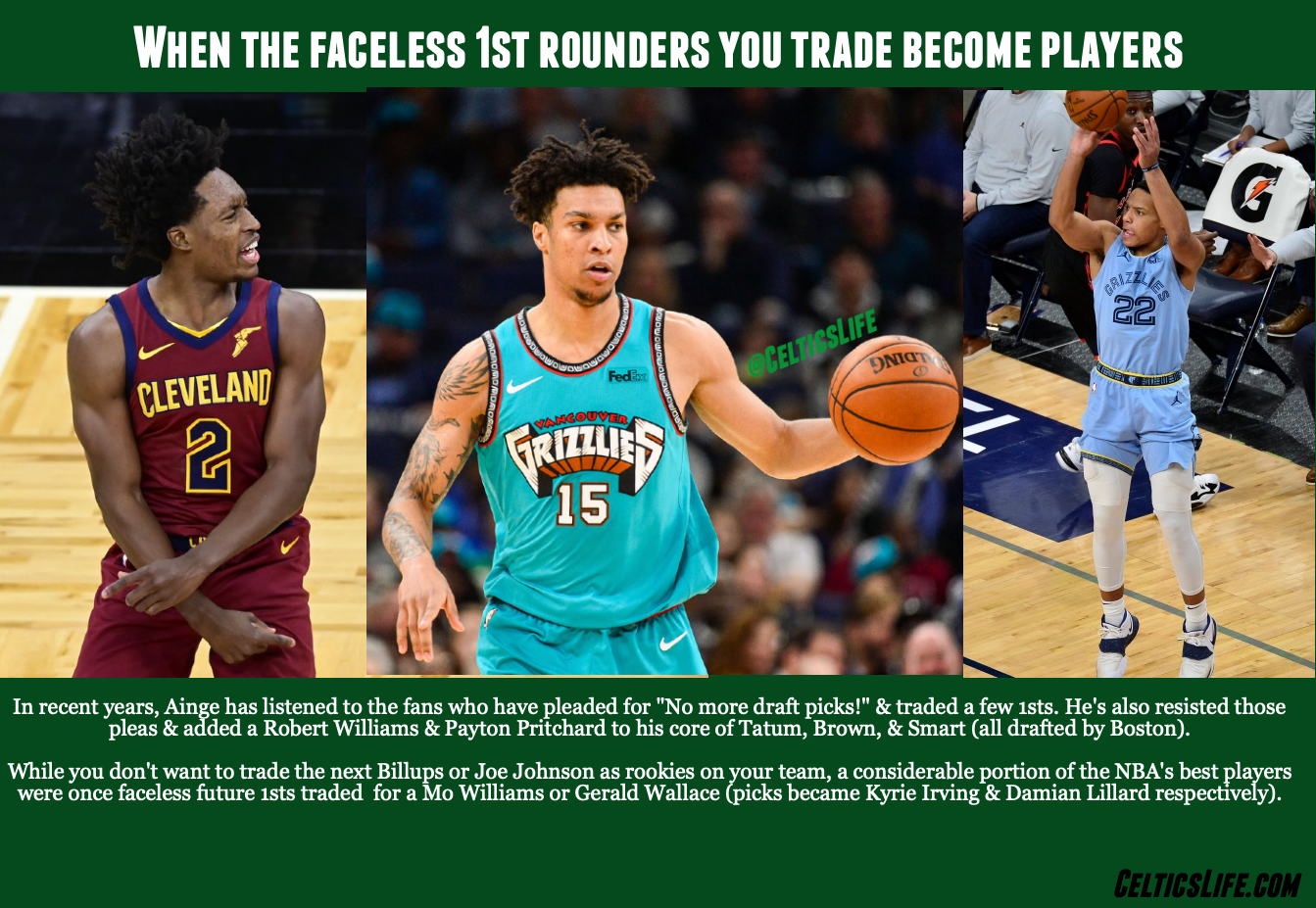 Maybe Kemba is traded for two lesser players who are a bit overpaid that equal his salary. But not including Kemba in any tier seemed cowardly or an easy way out. So I put him in tier 4 to signify if he has any value its still less than a 1st. Again this is based on his age and contract. If he was making Theis or Smart money and/or younger he'd be on a higher tier. Talent wise he's a tier 2 player. I really like Kemba and would love to see him play amazing for the Celtics down the stretch, so save your "hater" talk for someone that actually doesn't like him.


Also keep in mind this pyrmaid is for right here and now. Come the offseason a guy like Kemba is more moveable and players like Tristan or Theis may have walked, be on team friendly deals, or be overpaid. And the young guys might have made a Tyler Herro/Michael Porter Jr. like playoff leap to a higher tier.

Here is an example of a trade for a young potential All-Star where you're parting with one tier 2, one tier 3, and two tier 4 assets. You're also getting back a capable rotation wing who shoots 3's well in Snell. He's just a tier 4 player himself, so net wise you're giving up just one tier 4 asset and not two:

So with all of that out of the way, what do you think of these tiers? And how would your Celtics 2021 Trade Deadline asset pyramid differ?