Can we play the Kings again tomorrow? The Celtics won by a whopping 53 points tonight at the TD Garden. It's the second largest Celtics victory in the team's storied history. Jayson Tatum and Jaylen Brown combined for a royal smackdown.

Tatum finished with 36 points and 6 assists, while Jaylen added 30 points of his own as well as 10 rebounds. Robert Williams had another double of 13 points and 17 rebounds (4 assists, 3 steals, and 2 blocks to round out the Time Lord stat line).

The Kings had only one player crack double digits and that was Buddy Hiel with just 11 points. The Celtics are starting to get a nice reputation for their defense.

The Celtics have held 4 opponents under 80 points this season.

All other NBA teams combined have held 5 opponents under 80 points.

After the Celtics dominant win @tvabby caught up with Jaylen Brown about the performance ☘️ pic.twitter.com/3g4PWYSk4t

Ime Udoka on Jayson Tatum & Jaylen Brown: "Everybody kind of follows their lead. They're buying in on both ends of the court. ... They are the two pillars and leaders of the team." 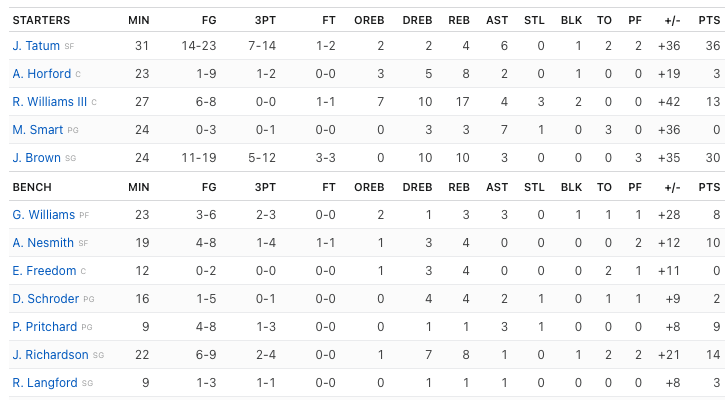