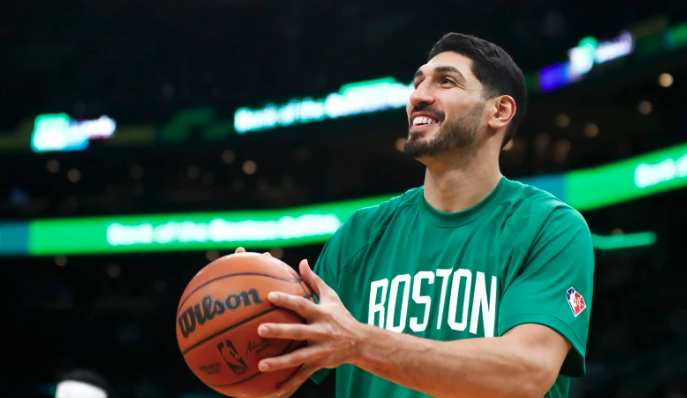 Boston Celtics center Enes Kanter is legally changing his name to Enes Kanter Freedom, @TheAthletic @Stadium learned. Kanter will be his middle name, Freedom is his new last name. He becomes a U.S. citizen on Monday.

Congrats to Enes on becoming a United States citizen. He's been shunned by his home country of Turkey and his parents for that matter for his criticism of Turkish president Recep Tayyip Erdoğan. Nice for Enes to finally have a place again he can call home.

Regarding the name change, while is does have a Metta World Peace, Ron Artest vibe to it for sure, it's not harming anyone. I had no issue with Artest's name change either.

If anything, since the Kanter's reportedly want nothing to do with him, one wouldn't blame him for dropping the surname. Enes ended up keeping it as his middle name. Hopefully his family embraces him back at some point.

Say what you want about Enes and agree with his views or not, but the man does fight for freedom. He's not a puppet to any political party or country. If he sees a wrong, he calls it out. Even if it's the NBA "no no" of calling out China and their human rights violations.

Recently he's been in the news for a war of words with LeBron James. Kanter has called LeBron a hypocrite for turning a blind eye to human rights causes in China, Hong Kong, Tibet, and Taiwan due to James not wanting to support a cause that would likely cause him to have a financial hit.

Lebron dismisses Kanter as someone trying to just use James' name to promote himself. James refused to speak on the issues in China, which kind of proved Enes' point.

Kanter is now going after the companies like Nike and Adidas themselves:

NBA Player Enes Kanter: "We need to call out these companies. Nike, the biggest sponsor of NBA. In America, they stand with Black Lives Matter, Latino community, No Asian Hate, and the LGBTQ community, but when it comes to China, they remain silent." pic.twitter.com/xhbFQDBiAs