Marcus Smart and the Boston Celtics defeat Toronto Raptors 109 to 97 to move back over .500 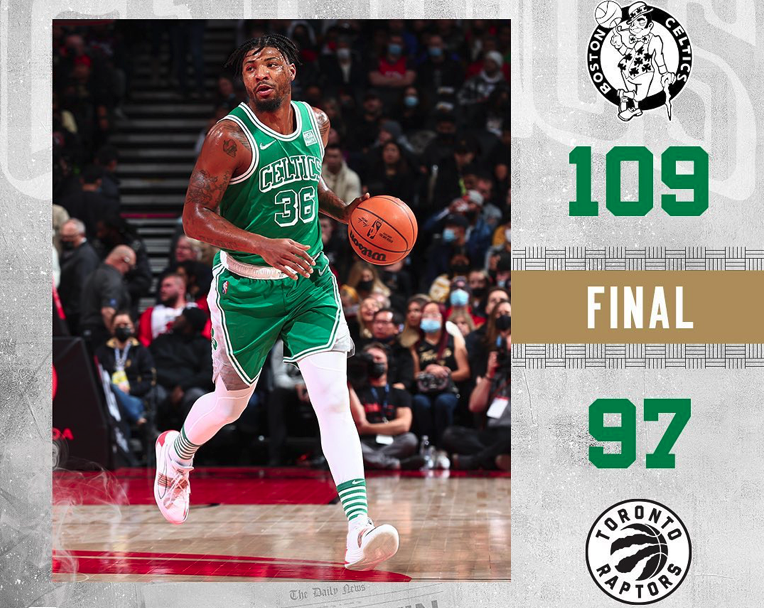 The Celtics, owners of the dubious worst statistical, overall 4th quarters this season in the league, went the full 48 minutes tonight to get back up over .500 with a 109 to 97 win over the Raptors.

Marcus Smart led the way with 21 points, 8 rebounds, and 7 assists, doing most of his work in the 2nd half. Jayson Tatum had another brutal shooting night, but Josh Richardson stepped up offensively with 18 points off the bench.

Al Horford had a double double (17 and 11) in a solid bounce back performance and Grant Williams had another good game filling in for the oft injured Robert Williams. Grant finished with 15 and 5. He hit 3 of his 4 3pt attempts to put him the most exclusive company on the season:

Jaylen Brown finsihed with 16 points while Enes Kanter Freedom had 9 points and 10 rebounds off the bench on the eve of becoming a United States citizen.

The Raptors were led by Fred VanFleet and rookie Scottie Barnes with 27 and 21 points respectively in the losing effort. Their leading scorer, and Celtics Bubble heart breaker, OG Anunoby did not play due to a hip injury.

Celtics win!
L to the OG (Anunoby DNP) and the rest of the Raptors.#CelticsLifeGifGames #succession #celtics #BleedGreen @succession pic.twitter.com/doSjEuis0Z

The Celtics will close out November with a 11-10 record a quarter way through the NBA season. Boston will host the Ben Simmons-less 76ers on Wednesday at the TD Garden to kick off December.