It is time for Marcus Smart to go 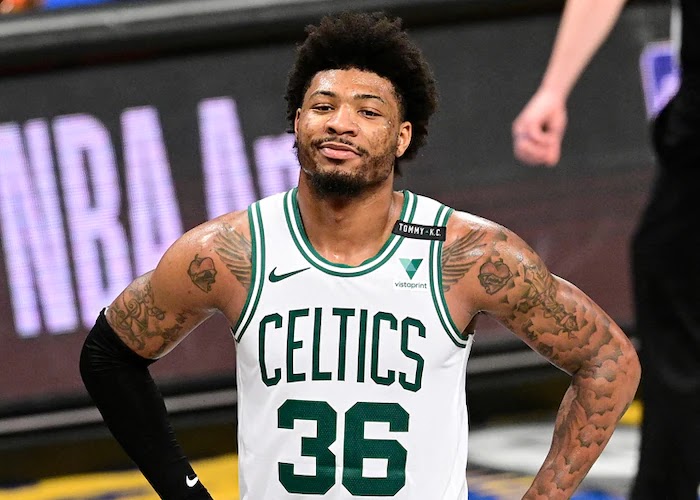 Marcus Smart has been very passionate about being with the Celtics. He's been putting his body on the line, and has never been afraid to try to do whatever it takes to help secure the victory. He has been thought of as the leader of the Celtics by many of us, but is it finally time we can all agree it is best if we part ways? He has done all he could to put us in the best position to win and I appreciate that, but at this point he does more harm to the Celtics than good.
Marcus has always been a below-average shooter and sometimes a questionable decision maker, so that's no surprise, but now what he is doing off the floor is hurting us equally as bad. First, let's start in the preseason. He gets suspended for the preseason finale for missing the flight which is uncharacteristic for a player a lot of fans would consider the leader of the team. We obviously do not know the reason he missed the flight, but from the outside looking in, it's not a good look.
Fast forward to November 1st, and the Celtics are taking on Chicago. Smart came into this game averaging 7.4 PPG on 29% shooting, and 23% from deep. Smart finishes the game with his best performance of the season thus far with 16 points, shooting 5/11, and 3/5 from beyond the arc. The Celtics would go on to take a 14-point lead into the 4th, but eventually lose 128-114 to fall to 2-5 on the season. Tough loss early in the season in front of your home crowd, this is the exact moment the leader of your team is supposed to step up and keep everyone focused on coming back strong.
Marcus Smart did the complete opposite of that. We don't know what was said in the locker room prior to this interview, but regardless of what was said behind the scenes going to the media doesn't solve anything.

Marcus Smart: "I would just lik

Jayson Tatum on Marcus Smart's comments after Bulls game: "Personally, we talked about it. We had a team meeting I guess. I know how to play basketball, I've been doing it a long time. I'm pretty successful at it...I have things I can work on."

"That's something that they're going to learn. They're still learning. We're proud of the progress they're making, but they're going to have to make another step and find ways to not only create for themselves but create for others on this team to open up the court for them ...

Whether you agree with those comments or not, you can not publicly blast your teammates like that no matter who you are. Publicly calling your teammates out to the media almost never ends well. Jayson Tatum didn't elaborate too much on Smart's comments, but a few days later had this to say.

Jayson Tatum on Marcus Smart's comments after Bulls game: "Personally, we talked about it. We had a team meeting I guess. I know how to play basketball, I've been doing it a long time. I'm pretty successful at it...I have things I can work on."

Jayson Tatum on whether Marcus Smart's comments should have stayed in-house: "I think you know."

I love any player that love to put the Celtics' Green on every night, but personally, I have had enough of Marcus Smart. His basketball ability isn't worth the headache of watching this man shoot 10-15 times a game, and on top of that he causes a major distraction by publicly calling out our two franchise players.

Celtics had a players-only meeting to try to clear up the issues they had amongst each other, and it did not go as planned. Woj reported mid Celtics-Magic game, that the meeting did not go well.

The #Celtics held an “emotional” players only meeting. Woj says it was “not terribly productive” and “not even beneficial.”

The situation gets worse and worse. pic.twitter.com/pDznbKDFGs

It is clear that they didn't take those comments kindly, and Ime Udoka has come out today and stated he has decided against captains. "That's probably in the rear view at this point." That is not the worst news, but it's not what Celtics fans wanted to hear when your head coach scraps the idea to name captains likely to not create any further issues.

In my opinion, Smart's leadership is the only thing that kept him valuable. His defense and hustle is great don't get me wrong, but his playing ability isn't anything special. We put up with Smart's playstyle because he was a "great leader" and the "heart and soul of the Celtics", but at this point we all have to agree, Marcus Smart is not the leader we thought he was, and doesn't offer enough as a player to be who the Celtics want if they're going to win Banner 18.