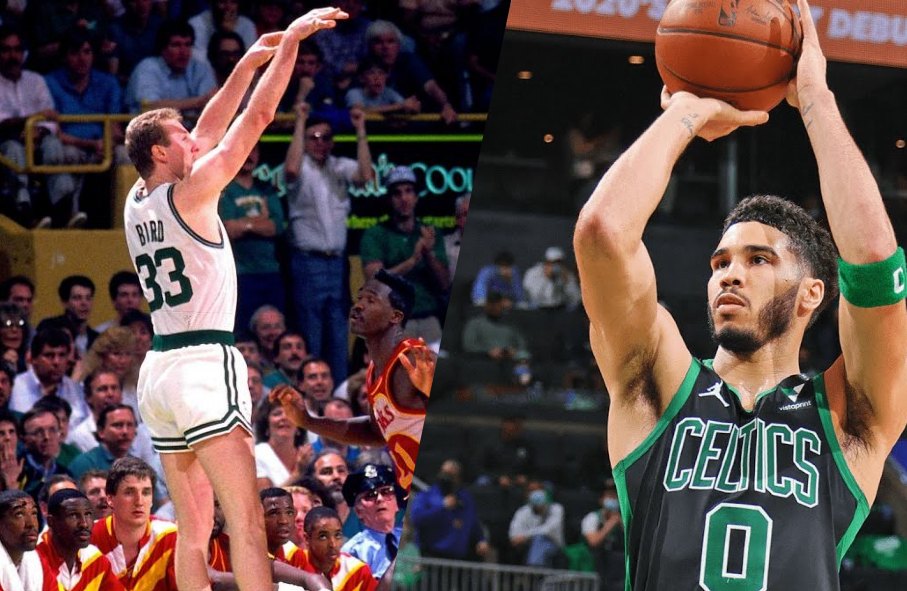 After tying Larry Bird on the Celtics All-Time 3-Pointers Made list Monday night, I'm sure Jayson Tatum would have preferred to pass him that night as well. As expected Tatum did pass Larry legend tonight, but it was bittersweet due to the loss and the fact that the 3 that passed Bird was Tatum's only make out of the nine he attempted tonight.

Congrats to the 23 year old Tatum none-the-less. With a longevity milestone you can't just focus on one game. Tatum now stands alone in 5th place with 650 treys in an ever changing Boston Celtics list. Paul Pierce will remain in 1st for quite some time with 1,823. Tatum has consistently averaged just under three 3-pointers made the past 3 season which would put him on course to move up to Ray Allen's #3 spot by season's end.

Then again the #4 place Marcus Smart has 52 more made 3-pointers so he might get their first. Probably will come down to games played and who misses time.

Antoine Walker and his 937 treys will remain in 2nd place this season. He's safe... for now.

3-pointer records and scoring numbers have been a rather fluid situation the past several years as 3-point attempts have skyrocketed in the last decade. Jayson Tatum is averaging 8.7 attempts per game this season. For comparison sake the most 3's Larry Bird ever attempted per game was 3.3 (1990-91) and he had a handful of seasons where he attempted less than 1 a game.

With the added practice and coaching promoting the shot, players' efficiency have improved. Tatum actually hit his 649th 3-pointer in less attempts than Bird took. Of course one would imagine if Bird grew up in the modern game his 3-pointers made and percentage would be MUCH higher. Originally the shot didn't exist in Bird's lifetime and for his NBA career it was more of a gimmick shot, so it wasn't a shot you would spend most of your time practicing on.

Tatum is only shooting 33% from 3's this season, but has shot just under 40% for his career prior. He's not on this solely due to chucking. He's an elite shooter.