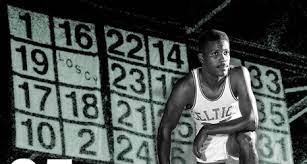 The Boston Celtics’ 23rd Home Opener was an eventful Wednesday evening at the old Boston Garden – pomp, circumstance and more than a little celebrity.

The Royals had repelled the star-laden Lakers the night before in Ohio … so tired legs combined with the absence of Oscar Robertson allowed the Celts to “play from in front” all night and send Mayor White and his constituency home happy.
Coming off a three-day break, Coach Russell limited his rotation for the evening to seven players.

In his 1979 memoir Second Wind, the GOAT offered these thoughts regarding the Big O: “Of all the players in the NBA, I had the most fun playing against him and his teams. He was so brilliant … He had a joy and ferociousness that nobody else could match.”
Robertson’s Royals twice had the Celtics in a 1-2 playoff hole, but couldn’t quite hog-tie GOAT & Co.
Bill also writes that Oscar was the only rival to whom he revealed his retirement plans.

The only person I’d told that I was retiring was Oscar. That year the last time we played the Royals was in Cleveland, and as always Oscar clubbed me all night with his off hand. After the game I felt flooded with sadness about leaving the kind of games we had together. I sought him out when it was over and said, “Oscar, I’m not going to play any more, and here on the court I want to tell you how much fun it’s been playing against you all these years.” I felt all emotional and flustered. Oscar said, “Good luck.” 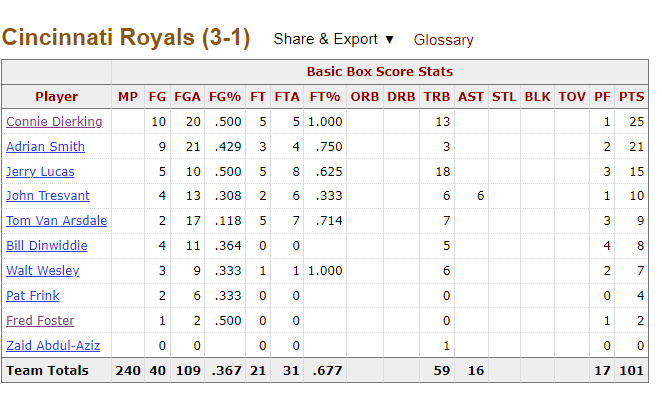 Even considering Oscar’s DNP, a Hall of Famer, an All-Star Game MVP and two Celtics-to-be suited up for the Royals on the night … not to mention a guy (Connie Dierking) whose name comes to my mind these days whenever I see one of the Lopez twins launch an old-fashioned hook shot. 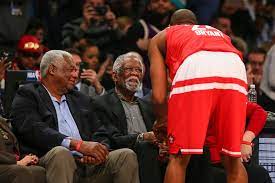