Do you agree with Isaiah Thomas that Kyrie Irving is definitely one of top 20 NBA players of all-time? 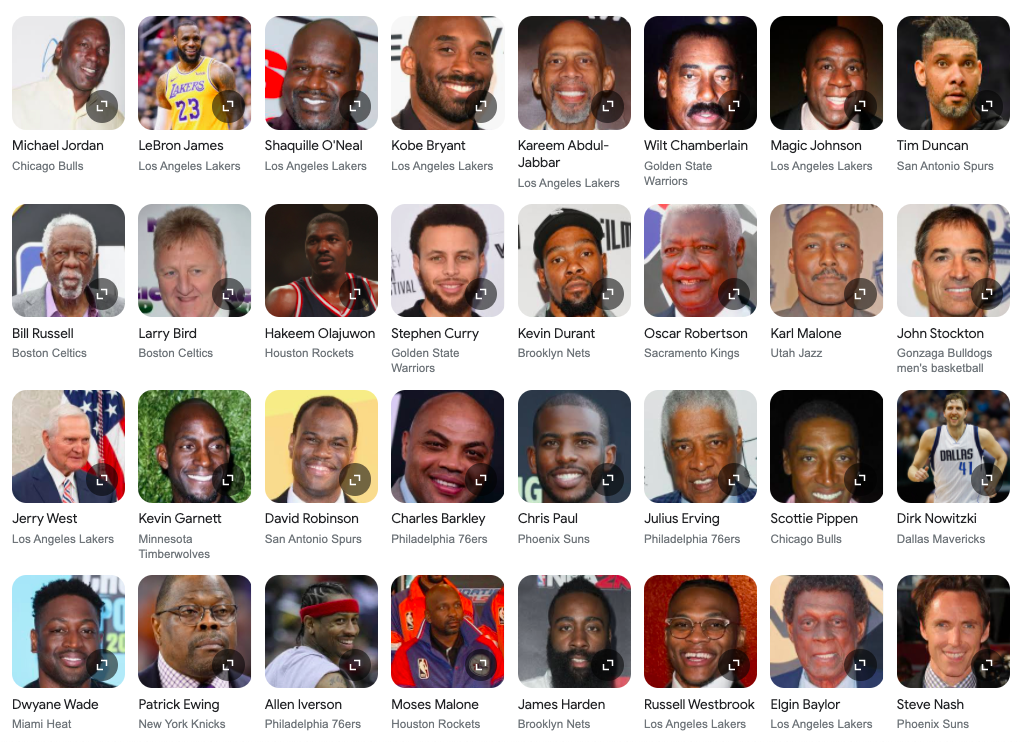 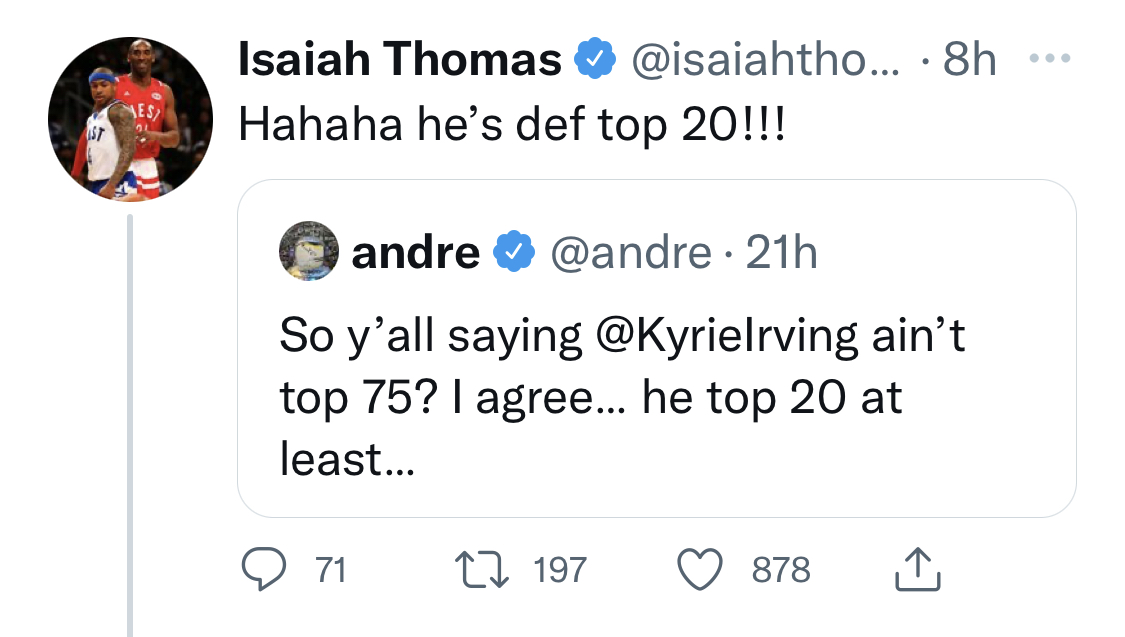 Former Celtics All-Star point guard Isaiah Thomas turned some heads when he agreed with Warriors wing Andre Iguodala that another Celtics guard Kyrie Irving is not only a top 75 NBA player of all-time, but he's definitely top 20 all-time.

I've always wanted IT to get some guest spots with NBC Sports Boston to mix things up there, but judging by his thoughts today, I'm not so sure now. He actually responded to a bunch of tweets from people puzzlied with his stattement, but then tried to move the goal posts.

PG wise in nba history who is better than him?

After changing the topic temporarily to point guards and saying that Isaih Thomas, Magic Johnson, and Steph Curry were the only point guards better than Kyrie, IT decided to take his ball and go home when asked to either name his top 20 or which 4 players on the list below he'd remove.

Curry. OG Isiah, magic are the ONLY PGs you can put in front of him IF you do. Talent wise he’s the most skilled and talented we EVER seen at that position. Obviously other things factor into how people rank players. But talent alone NOBODY is messing with Kyrie

Hahahahahaha I figured that would be your list. Smh won’t talk hoop with you again.

I think Isaiah wanted to give Kyrie props, but the issue is with All-Star rosters and all-time lists is that it's easy to say a player deserves to be on, but not so easy to then name who should be off.

Kyrie did win one championship and hit a huge shot, but Ray Allen won two championships and also hit a big shot. Robert Horry and Steve Kerr have tons of championships. Gabe Pruitt has a ring.

Honestly, I'd never have Kyrie in my top 75. I'd take Rajon Rondo even over him. If he didn't play with LeBron all those years, he'd have nothing but losing on his resume. It should be noted that without Kyrie, LeBron still made the Finals the following season in Cleveland. You could plug many players in that sidekick role next to LeBron.

Irving won a lot of games last year in Brooklyn... well the games that he played, but that was much more to do with Kevin Durant and James Harden. In fact the prior year the Nets did worse with irving than they did the previous season with D'Angelo Russell. The Celtics did worse with Kyrie than they did with IT or Rozier at the point.

In Cleveland without LeBron, Irving did nothing but lose. Sorry, but while the talent was/is there, there is no way that he's a top 20 player in NBA history.

It would have been nice if Isaiah Thomas actually backed up his claim by either providing his top 20, or listing players that should be removed from our list, but reality is social media is a place where celebrities can state hot takes and thousands of their fans will agree with them, no matter how bizzare.

If Thomas really believes Irving is one of the absolute greatest NBA players of all-time, then a post playing career on TV will only be due to his charisma, not his opinions. At least Kendrick Perkins and Paul Pierce will provide points to try and back up their takes.

Not a great look for the Celtics point guard we all love today. There are ways to support your fellow current NBA bretheren, without dismissing many legends of the past. Irving belongs nowhere near a top 20 list. But if Isaiah provides his other 19 then at least we'll have some idea into his thinking.

Kevin Durant's list was heavily biased to players he's witnessed or played against. At least there was a reasoning and he provided a list. Sounds like Isaiah wanted to show love for Irving, but doesn't have a concrete top 20. Perk and Pierce would have.

Anyway, what say you? If you have Kyrie in your top 20, let us know your list. Do you think he should be in the NBA's top 75 that will be completed tonight? Or do you think he's a very talented basketball player, who's actual resume on the court in his career, doesn't measure up to the other greats?