Who are the top Boston Celtics players in history?

The Boston Celtics were established in 1946 and since then there have been quite a few accomplished players on the team's roster. The team is considered one of the most successful in the NBA and is beloved by many fans. The Celtics have also recently hired a new head coach Ime Udoka.

The team has seventeen championships, nine conference titles, and thirty-one division titles under their belt. In other recent news around the team is that Damon Stoudamire was hired as an assistant coach. This article will go over the top Celtics players who have played for the team since it was created.

The No. 6 was retired by the Celtics in honor of Bill Russel, who is also the namesake of the NBA Finals MVP trophy. Among his honors are five times MVP, 11 NBA titles, participated in the NBA All-Star game twelve times, and more. Russel also coached the Boston Celtics and played for them at the same time at one period and got the team two NBA Championships. He is known for a legendary defensive and used his 6’9” height, which at that time was impressive, to benefit his team.

Havlicek's nickname is “Hondo” and in his first years after coming off the bench he excelled in the “sixth man” role, but in the 1970s he was in his prime after Russell and Jones retired. He is well known for his clutch steal in the last seconds of the 1965 Eastern Conference Championship final. He has eight NBA Championship titles, participated in thirteen NBA All-Star games, and the number 17 was retired by the Celtics in his honor. 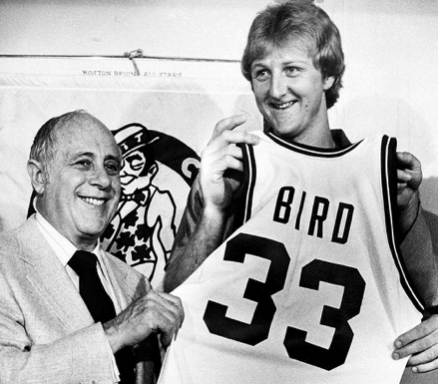 Larry Bird is mostly known for popularizing basketball and joining the Celtics, is just what the team needed. The bird was capable of rebounding, scoring, locking down his man, and playing point forward, which is something only a few players can do even today. He managed to win three NBA titles, three MVP awards, participate in the NBA All-Star game twice and the No. 33 is in the Boston Celtics is retired in his honor.

McHale was in his prime playing alongside Larry Bird in the 1980s. He wasn't only good in the power forward position, but also at shot-blocking. He was a seven-time NBA All-Star, won three NBA titles, and two-time Sixth Man of the Year. McHale's statistics aren't the only memorable thing, he was a good team player and never let his ego get in the way of the game. His number (thirty-two) was retired by the Celtics.

If you are a fan of basketball, then you can visit the BetMGM Online Sportsbook and place a bet on the Boston Celtics or any other favorite team you might have. Keep in mind that the list above isn't in order and the spirit of acknowledgment, we will list a few honorable mentions that would have made it on our list if it was longer.