George Karl throws some hilarious shade at Carmelo Anthony... and I love it

And it kept our coaching staff up at night a decade ago when we were stressing the importance of team play and defense! 😆 https://t.co/riomQd667N

Carmelo Anthony of course was drafted by the Nuggets and had his best years there, but never made it past the Western Conference Finals despite having some solid supporting casts. Then he forced a trade to the Knicks, never won anything there and has bounced around the NBA and unemployment line since then.

George Karl made it to the NBA Finals coaching the Seattle Supersonics in 1996, but ran into Michael Jordan's 72 win Chicago Bulls. Karl and the Sonics lost that series 4 games to 2.

He would later coach some successful Bucks teams as well as the aforementioned Nuggets. I expect Carmelo to comeback at Karl, not to mention all the talking heads on TV and blue check marks on Twitter will have their say. They'll likely bash Karl for never winning an NBA championship either.

Truth be told, whether it right or wrong for Karl to tweet this, he's absolutely correct. Anthony's biggest regret should be that he focused solely on being a dominant player on one end of the court, and a one dimensional one at that since he wasn't a passer. If he had a more rounded game like other stars where he made his teammates better with his passing and was a solid defender he could have won a title in Denver. Or elsewhere by now.

Karl does a pretty solid defending himself, so even if 'Melo claps back, George will likely be ready. Last year he had this solid comeback to Mark Jackson's critique:

I heard @MarkJackson13 is taking shots at my defensive coaching during tonight’s broadcast.

Remind me, how many all-star teams did you coach, Mark? How many DPOYs? How many Finals appearances? How many of my teams became dynasties right after I left?

And here's the screen shot of the 'Melo in case enough Generation Z'ers bully Karl into taking the tweet down. 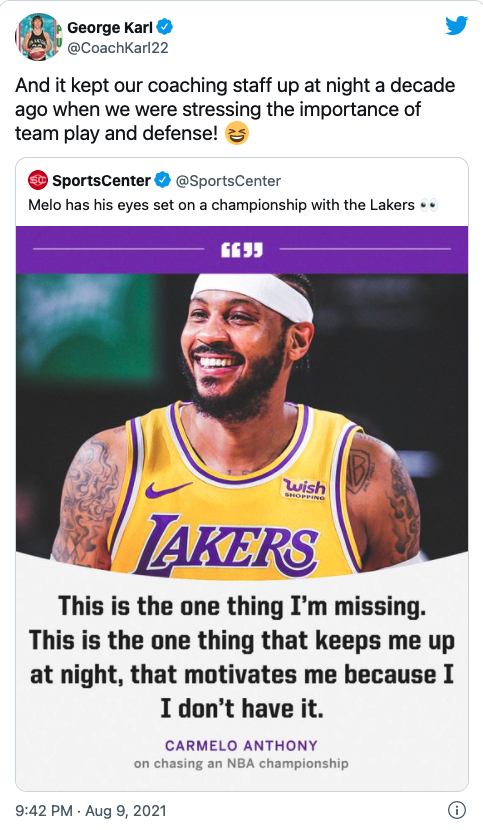