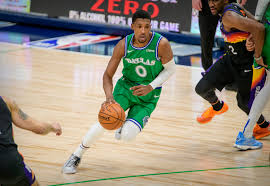 New Boston Celtics G/F Josh Richardson has agreed to a one-year extension that pays him $24 million over the next two seasons, agent Erik Kabe of @BDA_Sports told @TheAthletic @Stadium.

After initially not wanting to sign any players to deals past this season to maximize cap space next summer, Brad Stevens continues to flip the script. Stevens now has signed Marcus Smart and Robert Williams to lucrative long term deals and has turned Josh Richardson's expiring contract into a new 2 year deal.

Who's to say if all or any of these players will remain Celtics for the durations of their new extensions, but each signing is a vote of confidence in each respective player. With this Richardson deal, Stevens isn't guaranteeing Josh will be here for the long haul, but Brad is increasing the odds that he could stick. For one thing, Richardson on an expiring deal this year would have been a lot easier to move, so a midseason deal is considerbly less likely. now.

You can look at the JRich extension and the other such Celtic deals as giving the roster cost certainty down the line. But a good player under a good contract is also a good trade asset.

The Celts should be better this season, but Stevens is simultaneously playing the long game. https://t.co/YVrq8Xxbch