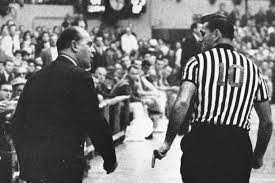 In his 1979 memoir Second Wind, Bill Russell acknowledges one occasion during his NBA days when he was approached by a “big-time gambler” about influencing the outcome of a ballgame. Bill’s response was to point out that, given his income and future earning potential, he couldn’t even consider taking such a risk for less than nine or 10 million per game. Russ went on to expound thusly on the topic:

I’ve always thought the most likely target of gamblers would be the referees. They make peanuts, they’re highly abused by both the fans and players, and they have more control over a game than anyone else. Moreover, the normal incompetence of NBA referees would be a perfect disguise for a corrupt one. (p. 108) 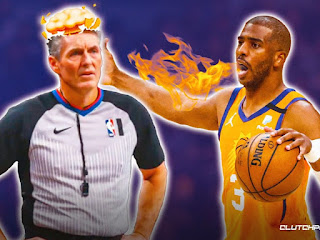 Now, with all the clamor this week regarding the assignment of notorious Chris Paul-nemesis Scott Foster (Paul now stands 0-13 in the playoffs under SF’s arbitration) as the officiating crew chief for Tuesday night’s decisive Game 6 of the NBA Finals, this might be a good time to consider the extent (if any) to which the whistle-blowers impact winning or losing.
In this season’s 85 playoff games, teams attempted the same number of free throws just four times – in the other 81 tilts, the team with more FTA’s was 49-32 (.609). [That winning percentage rose to .750 (9-out-of-12) when Foster was working.]
FTA’s have not influenced an NBA post-season this much since 2015 – but just two seasons ago had no impact at all, 39-39 (.500), with 4 games even.
Here’s a run-down of post-season FTA impact for the last 10 years [I've included the impact of Home-court advantage as well, if only for the sake of comparison]:

Home teams won 49 of this season’s 85 games (.576), but 10-out-of-12 (.833) under ol’ Scott’s supervision.
One of those home winners was none other than Monty Williams’s Phoenix Suns in Game 2 of the Western Conference Final against the Clippers. Worthy of note is (a) CP3 was inactive, and (b) this was one of those three Foster games where the losers took more FT’s than the winners.
Abacus Revelation for the Road
What do Leon Wood, Haywoode Workman and Bernie Fryer have in common? All three are former NBA players who subsequently became full-time NBA referees. 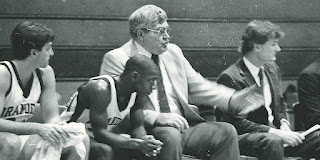 To my knowledge, there’s only one man who ever suited up to play for the Boston Celtics AND later worked (albeit briefly – only two games) as an NBA referee … though he would spend a decade-and-a-half as a college coach.
I’m not familiar with the background story, but this rugged player (Red Auerbach’s first “enforcer” with the Men in Green) officiated those games during the close-out to the 1959-60 regular season. Both were Celtic victories at home, Friday February 26 over Minneapolis and Wednesday March 9 over the Knicks. (On each occasion, he was paired with an experienced and accomplished partner, Jim Duffy and Mendy Rudolph, respectively.) So, who is this “jack of all trades”?
Here’s a hint.