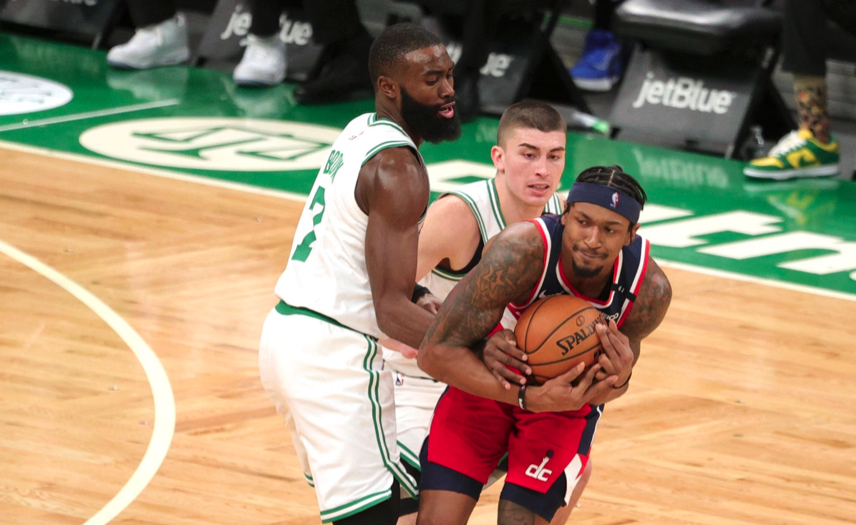 Good news for those that want to potentially see Bradley Beal in a Celtics uniform. Very bad news for those who wisely don't want to part with the younger All-Star Jaylen Brown in any deal. Beal is contemplating making a trade request prior to this upcoming Thursday's NBA Draft and the Celtics are on his list of preferred destinations.

Beal does not have a proverbial list of preferred destinations, but it was mentioned by multiple sources that he would welcome joining teams such as Boston, Golden State, Miami or Philadelphia—although Beal requesting a trade would all but guarantee an expansive bidding war across the league. The number of potential destinations and interested suitors could span a significant portion of the NBA.

"Beal's the guy right now," one assistant general manager said. "The one guy that could be available, that could help you win the whole thing."

If Beal goes on the market right now and he is open to being traded to multiple teams there is no way a Celtics offer minus a Jay will will win the bidding. And trading Jaylen for Beal would be a temporary lateral move to make headlines this summer, but come three years from now when Jayson Tatum can actually start to consider leaving, it would put the franchise in a worse situation.

Beal is not a both sides of the ball, all around MVP talent that you trade a young All-Star for. He isn't Kevin Garnett and you wouldn't be adding him to two stars in Pierce and Allen. Also Jaylen Brown is a better young player than Al Jefferson was and projects to have a higher ceiling as well.

Source: If Brad Beal does in fact move forward and request a trade, Boston would be a preferred destination to play with longtime friend Jayson Tatum and compete for a championship.

The Celtics no longer have the draft capital they once had to make a deal for Beal make sense right now. The only ways that make sense for Beal to end up in Boston is if he signs as a free agent here next summer or he forces his way to Boston by only agreeing to a deal to them, so that the Celtics can acquire him without parting with Jaylen.

By opening up bidding now, that more or less takes both those options off the table. Reality is Tatum, Beal, and Brown would be an odd Big 3 since all of their number one traits are scoring. There's no playmaker/point guard in the trio, nor is there a big. None of them are defense first guys who are just as valuable whether they score 25 or 15 a night.

If Boston was dead set on adding Beal to Tatum then the move to make would be to hold onto Jaylen and then trade him in a year or so for another young star who plays a more complimentary position.

Besides the age discrepancy the other reason why Tatum and Beal make a worse pairing than Tatum and Jaylen is salary. Beal will make at least $15 million a year more than Brown on his next contract (and if the Celtics trade Jaylen for him they will be forced to pay Beal whatever he asks for next summer). That's $15 million less flexibility cap wise, luxury tax wise , and luxury repeater tax wise.

Beal isn't a Durant or LeBron type that makes you a contender on his own or paired with Tatum. He'd be a great guy to have as part of a legit Big 3. He's the Ray Allen piece. But the Ray Allen piece only worked next to Pierce, because Boston still had the Al Jefferson won to trade for KG. Just say no to a Brown for Beal swap.