Here's the one way for Tatum, Beal, and Lillard to all play together on the Celtics 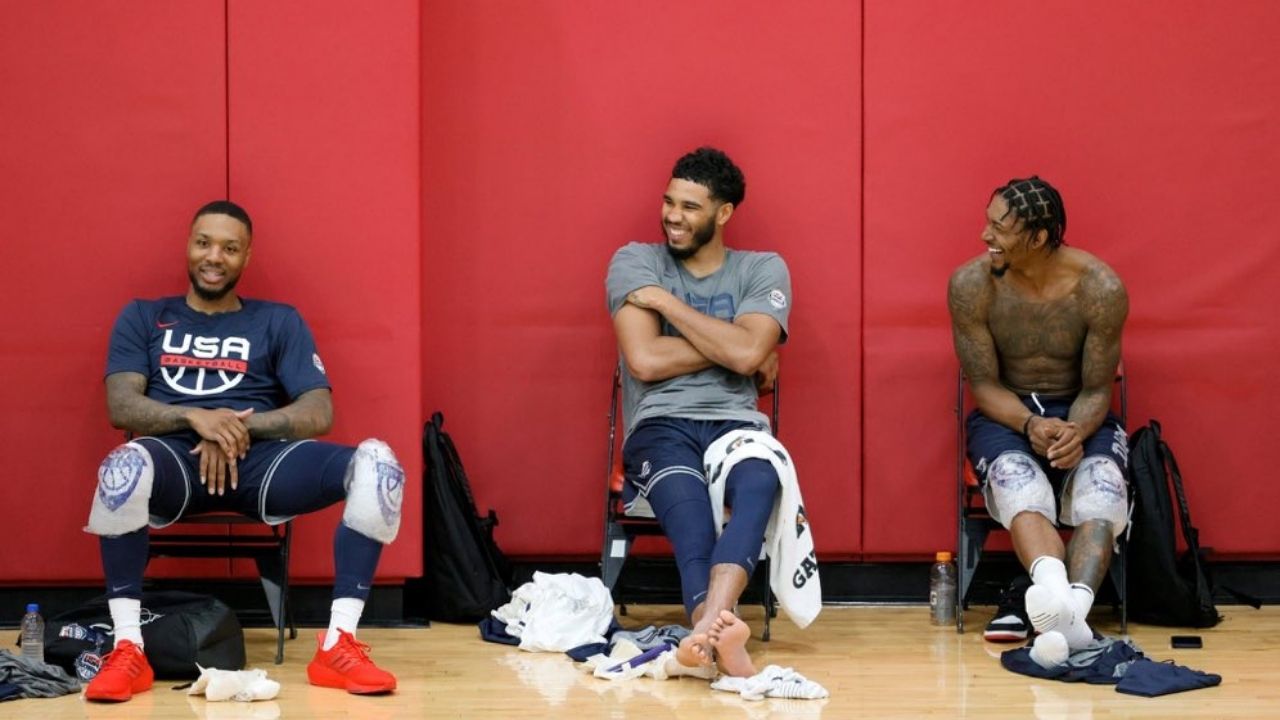 We like to post unique ideas on Celtics Life. While everyone else is writing about whether the Celtics should trade Jaylen Brown for either Bradley Beal or Damian Lillard, today we'll present the one way to add both Beal and Lillard to the Celtics to play with Jayson Tatum.

Previously I wrote on 9 reasons not to trade Jaylen Brown, pairing the Jay's with a 3rd young star who's yet to peak or who's trade value currently has a buy low window, so obviously I'm a big Jaylen Brown fan here.

And to take it a step further, I recently even wrote Building a Big 3 (or Big 4) around Jaylen Brown which breaks down another option no has ever discussed, trading Jayson for a king's ransom. The plan for Stevens should remain to build around the Jay's, but sometimes your hands are tied. And in those cases, you need to maneuver as best as you can.

This is a different NBA than most of us grew up with. It's a stars controlled league where playing with the guys you want to play with is more important than playing for a specific team. Tatum recently discussed his goals, and besides MVP and going down as one the the greatest ever, he said he wanted to win championships. Not championships for the Celtics or in Boston, but championships.

While we shouldn't expect the same loyalty out of Tatum than let's say Pierce, Bird, or McHale, three players who played their whole careers (or just about in the case of Pierce) with the Celtics, that doesn't mean Tatum can't win multiple championships as a Celtic. Pierce wanted to championships in Boston, Tatum wants to win championships. There's a difference, but it's not the end of the world.

The third option: Building a Big 3 (or Big 4) around Jaylen Brown https://t.co/nNQ486IBCU pic.twitter.com/VGR0Wfmg5v

Tatum can't leave the Celtics now or anytime soon, so making a trade that will make the Celtics potentially better now, but likely considerably worse in a few years makes zero sense. In three years when Tatum is one year away from having the ability to decline his 5th year player option, THAT's when you need to convince Jayson that he has the right supporting cast moving forward.

For this reason trading for Beal or Lillard who will be in their early 30's to mid 30's respectively in 3 years makes no sense. BUT if Stevens and the Celtics have decided that they have to trade Jaylen for one of Tatum's guys, then screw it... Here's the way to get both.

Lillard, Tatum, and Beal currently are all on Team USA preparing for the Olympics. Back in 2008 LeBron James, Dwyane Wade, and Chris Bosh were all on the Olympic team and that's when they first discussed teaming up in 2012. Same story unfolded at the 2016 Olympics, where Kevin Durant, Kyrie Irving, and DeAndre Jordan where they first planted to seed of playing on the same team. All three of course signed with Brooklyn in 2019.

Stars are starting to align for the Boston Celtics and Ben Simmons https://t.co/sLuamZRhmR

If Tatum, Lillard, and Beal decide together that they all want to play together it can happen. And unlike the previous examples, you wouldn't even have to wait two or three years. Here are the rules of the plan:

If Beal and Lillard stick to the plan the Wizards will be forced with 3 options. Lose Beal next summer for nothing, trade him to the Celtics for a considerably discounted price or trade him to another team for a similar discounted price. LeBron James, Anthony Davis, Klutch Sports and the Lakers weren't patient with orchestrating their teaming up. The Pelicans actually got about as much as they would have received for Davis if they had multiple suitors. Maybe LeBron and the Lakers didn't mind overpaying due to LeBron's advanced age and the fact that the 2019-20 season might be his best shot to win another title. Davis though was also willing to go to the Knicks (for some odd reason, especially at that time) and our own Danny Ainge was unique in that he was a risk taker who would trade for a star who didn't want to commit to Boston long term. Ainge's thought was that stars whether they are drafted by Boston, sign here (like Horford), or are acquired via trade (like KG, Ray, Walton, DJ, Tiny) end up loving it here so convincing them to stay wouldn't be hard.

Somehow the Isaiah Thomas and the last Nets 1st for Kyrie Irving trade messed that all up. Irving actually had Boston on his list of teams to be traded to, but he decided not to re-sign. While it would have been idiotic for the Celtics to back up the Brinks truck for Isaiah after his hip injury left him sadly only a fringe NBA player, somehow trading Thomas made Davis decide that Boston wasn't loyal and was a place he wouldn't play. Again, just because it's the player empowerment era doesn't mean current NBA stars make the best GM's.

The greatest obstacle in having Beal and Lillard join the Celtics is the Wizards. They could for stubborn reasons take a 50 cents on the dollar offer from another team just so Beal and Boston don't get him for 60-cents on the dollars. Kind of a spite your face to cut your nose maneuver. But Beal,, similar to Lillard, has never been a problem for the Wizards, so there should be a way for the two sides to work together amicably.

If everyone waits til next summer, Boston can simply sign Beal. Everyone else under contract for the Celtics as of this post is on a moveable contract. Even Horford next summer could be moved to open up cap space. Personally, moving Kemba with a 1st next season would have been easier or just as easy than moving Horford next summer, but Stevens decided he needed to trade Kemba in June and kick in a 1st to make sure it happened. Just might require now to kick in another 1st to move Horford next summer if there are no takers for his expiring contract. 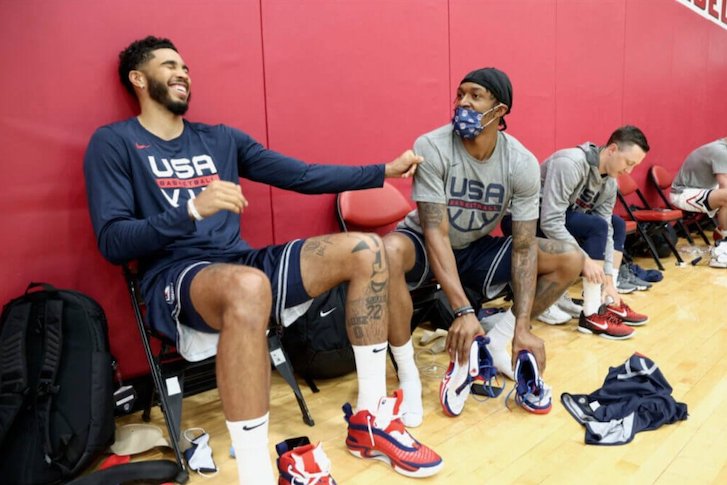 Everyone else can be easily traded either for nothing (like the Theis trade) or for no players but draft assets instead. For this reason the Celtics would need to be careful with any signings this year. The highest valued trade-able assets outside the Jay's the Celtics have are Marcus Smart and Time Lord and future 1st rounders. While all GM's will always covet future 1sts, players such as Smart and Time Lord only have trade value if they are on fair or team friendly contract.

If you overpay either with a long term extension, they not only cease being positive assets, but they can then only be moved in a dump with a pick or picks involved. Evan Fournier is another player you'd have to be careful with this summer. If you sign him to a team friendly or fair long term deal he can be an asset, but if you overpay him you're screwed. The Celtics also could try to see if he'd take a bloated one year deal in order to keep him, but maintain cap flexibility for next summer.

If Beal can convince everyone that he's signing with Boston in free agency, so if you trade for him he'll leave you in the summer of 2022, the Wizards won't get a better offer than some combination of Time Lord, Smart, and picks. Wizards fans might find this underwhelming, but its more than they could get in a sign-and-trade. The Warriors received D'Angelo Russell in their sign-and-trade of Kevin Durant to the Nets. The Celtics had to give up two 2nd rounders just to sign-and-trade Gordon Hayward to the Hornets. The Wizards don't want to wait until next offseason, when Beal could walk for nothing. 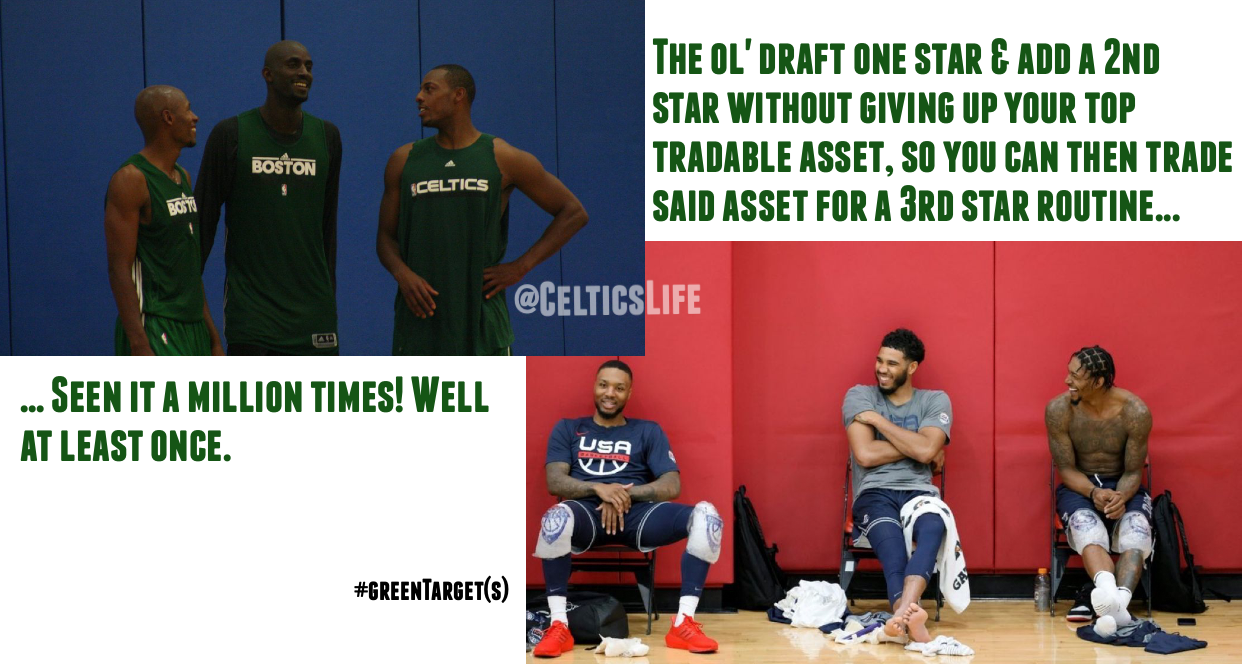 The longer Beal and Lillard remain on their current teams the better for Boston in terms of what they'd have to give up. The price goes down on Beal the closer you get to him just signing outright in Boston and the price goes down on Lillard as he gets a little older and Jaylen a little better. If you waited til next summer, you might even get Lillard plus something for Jaylen. This is another reason why trading Jaylen for either of these players right now is a foolish move.

Reality is when you build a Big 3 by adding two max players from other teams, all that's left of your original team team is your one star player and some low money players on rookie contracts. Rondo, Perk, and Tony Allen in the Celtics case in 2007. The Heat somehow was able to retain Udonis Haslem when they added LeBron and Bosh in 2012, but there was always something fishy about him taking much less to re-sign in Miami than to get his one big pay day in Dallas. The fact that he's still getting contracts ever year to ride the bench and not even play adds fuel to that fire.

So if you want an end game of Tatum, Lillard, and Beal, you have to accept that any and everyone on the roster could or are likely top be goners.Tatum made less than $10 million last season, but this coming season he's on the books for $28 million. Then next summer when the team needs the leverage of having a max cap spot available for Beal, Tatum's contract jumps up to $30.4 million. Jaylen is due $24.8 million this coming season and then $26.7 million the next.

Brad Stevens and the Celtics would be wise to give the Sacramento Kings a call https://t.co/YIn6jTrQhY pic.twitter.com/h7tA6k0tu0

Lillard is due $42.5 million for the 2022-23 season (the year that matters when creating cap space for Beal), so you see by trading for Lillard first, you'd have $16 million less in cap space to sign Beal. Now Beal might be willing to take a little less than a max starting salary of around $40 million (His max like Lillard's is higher due to yrs in the league. Another reason why young stars like the Jay's are gold for a team) to play with Tatum and Lillard, but he's not taking $16 million less.

For this reason trading Jaylen for Lillard first eliminates your ability to sign Beal as a free agent. And if that leverage is gone, you can no longer play the "Take this lesser offer than Jaylen or we'll just sign Beal outright" card.

At the end of the day LeBron can advocate for the Cavs re-signing a Mo Williams or Tristan Thompson for big money, but when the time comes that he can actually walk, he wants to be on a team that can contend for titles. That's why he left his older, overpaid supporting cast in Cleveland the first time in Miami.

Then when Wade and Bosh started to slip some, he went back to Cleveland to play with younger stars in Kyrie Irving and Kevin Love. Then when Love got old, and Kyrie demanded out, LeBron left again. This time to pair with Anthony Davis and he hoped Kawhi Leonard.

I think Tatum is making a mistake wanting to pair with older players he grew up looking up to over his contemporaries, but he's his own man. What you, I, or Brad Stevens thinks doesn't matter as much as what Tatum wants (Well not at all actually when it comes to you and I). So if Tatum wants to play with an older player he looked up to growing up, then might as well make the best of it and give him two of them.