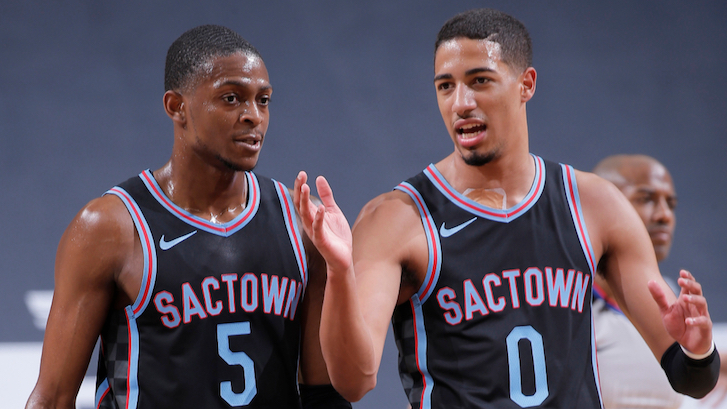 Back in 1988 the Cleveland Cavaliers had two very good young point guards in Mark Price and rookie Kevin Johnson. They decided to use that depth to trade for the final piece to their starting 5 in Larry Nance. Though KJ went on to become a star in Phoenix, the Cavs were happy with the trade as they became a contender.

While most fans and writers who cover the Celtics too often are prisoners of the moment, Brad Stevens has been given the job to make the Celtics champions again, not to win first prize in the 2021 offseason headlines pageant. I would have loved to have had Dame Lillard on the Celtics. Still would. But he's not a free agent and he won't be one until he's 35. To trade for him, you'd need to get Portland top change their stance on moving him, and you'd need to present them with a grandiose offer.

Jaylen Brown would have to be included in the deal for one. So you'd be trading a player who is an All-Star and has yet to peak for a great player who will start to regress very soon. Not to mention Lillard is starting his new contract where he will make close to $50 million a year eventually. So that means you can't afford much a supporting cast. Lillard and Tatum would be very exciting for a year or two, but still wouldn't put you over the top. And then when Tatum has the ability to opt out, you risk losing him, because you're stuck with an old $50 mil a year player as his 2nd star. Trading for Lillard years ago would have been great. Signing him as a free agent would have been fantastic as well. But you want a star during their 20', not in their 30's. Jaylen at age 24 actually has better numbers than Lillard did at that age. When Lillard was 24, that was the time to trade for him. You want players for what they will do today and into the future, not for what they did in the past. If Boston wants to add a Lillard they should be looking for a guy who is about to blossom into one. By that I don't mean they have to have the exact same game. What I mean is just like you want to buy the stock before it blows up instead of once its overpriced, the same goes in the NBA.

Unless you play in a city that has the ability to attract MVP caliber free agents like the Lakers, your best bet is to draft your stars. Second best option is to trade for potential young stars. That's what the Suns did with KJ. They make much less cap wise, they get injured less, and your window is much larger.

Brad Stevens and the Celtics would be wise to give the Sacramento Kings a call regarding their two young point guards in de'aaron fox and Tyrese Haliburton. Fox is the Mark Price in this situation and Haliburton is the KJ.

The Kings are very unlikely to part with Fox. He will be entering the first season of his 5 year $163 million extension this coming season. The only reasons why the Kings would entertain dealing Fox is if money wise, they can't afford to pay all their young guys. Besides Fox, Harrison Barnes and Buddy Hield are both on big contracts.

If Sacramento swapped Fox for Jaylen, they'd save money in the deal and then Haliburton would be free to play the point. Additionally, the Kings would be getting more than just Jaylen in the deal, so the Kings could fill additional holes. Maybe they also receive Robert Williams. A Haliburton, Hield, Jaylen, Barnes, Time Lord starting 5 is extremely talented.

For Boston trading Jaylen for Fox would be Stevens admitting that neither Tatum nor Jaylen has the ability to become a primary playmaker. That Boston needs a top shelf point guard. And let's be honest, just like there was a time in NBA history you needed a center to win a title, it's extremely hard to win now without a great point guard (or wing who essentially acts like one). Fox is 8 years younger than Lillard and you also save more than $10 million a year on his contract. More importantly he's the same age as Tatum and you're getting him for his prime years, not his mid 30's. This would be like trading for Lillard 8 years ago and getting the best of him.

The more obtainable point guard to seek is Haliburton. To trade for Haliburton you'd still have to give up a lot, but at this point in time, he'd cost less than Fox. Again this is buying a very strong stock right before it blows up. In my ideal world you can add Haliburon without giving up Jaylen. You'd then have your new Big 3 (ages 21, 23, and 24) for many years to come. You could surround them with a group of unselfish role players.

The starting offer for Haliburton would be Marcus Smart and the #16 pick in this draft. Smart is a guy every team who wants to make the playoffs has on their radar. Adding a vet in Smart to play next to Fox could very well launch the Kings finally back into the playoffs. They haven't been there since George Bush was in office. They'd be dealing their back-up point guard who's blocked because of Fox to go all-in on making the playoffs. And it's not like Smart is old. He recently turned 27 and I could see him having a long Tony Allen-like career on a perennial playoff team. Talking Grizzlies Tony Allen who was actually two years older than Marcus when he signed in Memphis.

The Kings could then package the #16 pick with their #9 one and move up and draft a top player in this draft. While the Cavs traded Johnson, most teams don't give up on a very promising young player that soon. The Kings would really need to feel like Smart would be their Nance or TA. Boston would likely have to add another sweetener or two, but it makes sense for Boston to do so. Unfortunately Smart is likely a goner via trade this offseason or next year, or he walks on free agency. Some team is going to offer him a great contract and I don't see Boston wanting to pay Smart money to be their 5th or 6th guy.

And I know we're all tired of Celtics free agents just walking. I wouldn't be surprised if the Celtics and Kings discuss a Smart for the Kings #9 selection prior to this draft regardless. But instead of wasting time trying to gut the youth on your team to partner Tatum with a star in his 30's, I would be on the lookout for the next big thing to compliment the Jay's. The Kings have two point guards. There could be a chance there to add a KJ.

If Smart and the #16 pick isn't enough, the Celtics do have plenty of sweeteners in Time Lord, Pritchard, Romeo, Nesmith, and future picks. Obviously you're not parting with all of them, but there is a map out there that gets you to a Haliburton, Tatum, Brown Big 3 for the next 10 years, so worth seeing if you can make it happen.