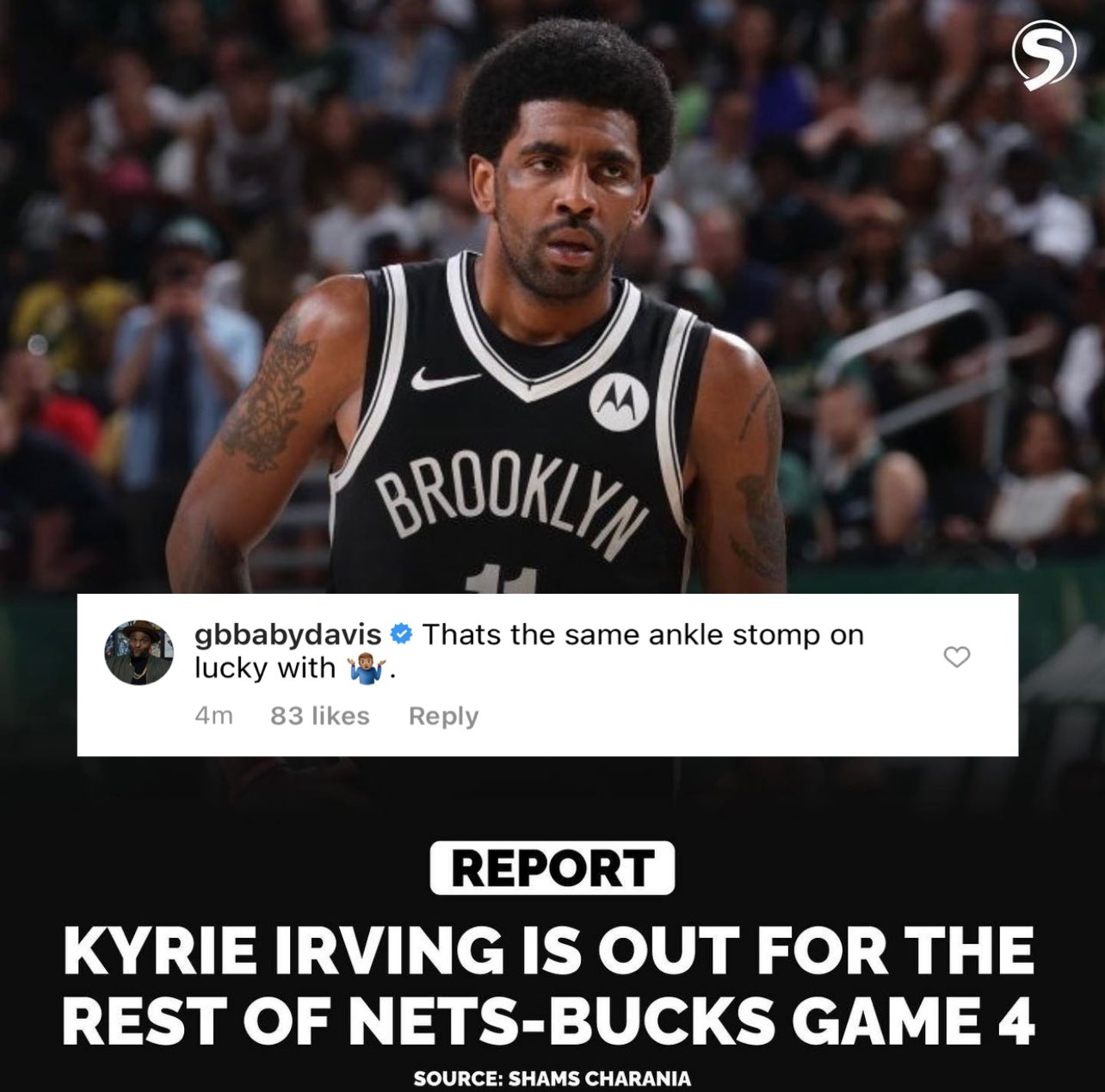 Kyrie Irving landed very awkwardly during Game 4 when he and Giannis made contact in the paint. Kyrie walked off the court on his own volition. Besides all the well wishes and "prayers up" for Kyrie on social media, you were bound to get Celtics fans poking fun at the irony of Irving hurting a foot he disrespected Boston fans, as well as current and former players with during his infamous petty stomp session after Game 4 of Round 1. 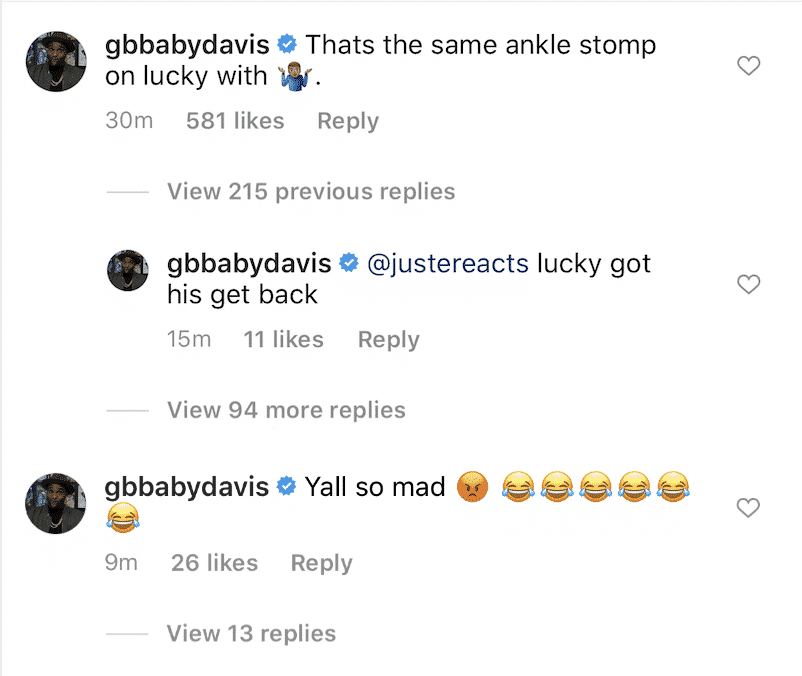 Glen Davis was one of the former players who decided to not only laugh to himself, but also tweet out some jokes. When last we saw Davis he was involved with this back and forth with Irving's teammate Kevin Durant: 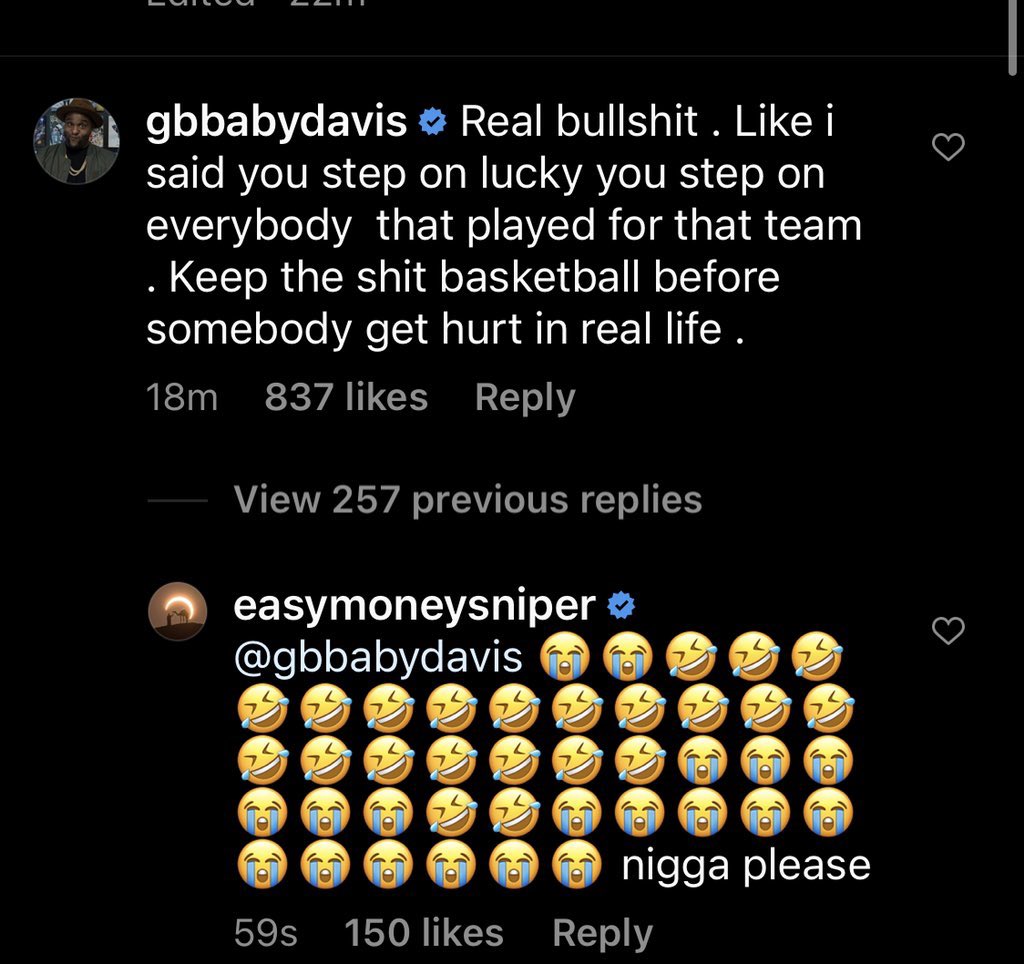 Durant of course is a current superstar, while Davis had some productive years in Boston, but was far from a star. So you can guess who the internet was pulling for. Davis eager to get a second chance, obviously took Kyrie's injury moment as his opportunity. What Davis might not have been aware of is that the internet on 2021 isn't the same as it was when Davis played in Boston. Back then, you expected fans to poke fun at rivals. Back then people weren't as sensitive.

Of course narratives in 2021 tend to be twisted, so the story became "Davis was rooting for Kyrie to get injured." Or Celtics fans for that manner. Quite a stretch from making a playful joke after an injury to the internet accusing people of wishing harm on someone. Reality is the vast majority of Celtics fans didn't wish injury on Irving. It's just that he's not high on our "drop everything and give him sympathy" list. Like if some star needs to twist his ankle... sure better Kyrie than Giannis.

The X-Rays on Kyrie Irving's ankle were negative, Steve Nash says. He will undergo further testing and treatment.

Kyrie will be fine. He will play basketball again, he didn't die, he will still make all his millions, he will still be adored by millions of fans and fanboys. He doesn't need Big Baby's love and sympathy or Cetics fans for that matter. He told you what he thought of Celtics fans after Game 2 and 4 and showed what he thought with his stomping display. Kyrie doesn't give two shits about you.

But Twitter and the internet are places where people can receive some fantastic virtual high-fives from fellow virtue signalers, so the usual suspects were all quick to attack Davis and Celtics fans, change the narrative, and then rejoiced for a quick second when they got Davis to delete the tweets. After that quick second they went back to telling everyone who joked about Lucky's payback or "karma" or whatever what bad people they are. More virtual high-fives followed.

You're a good person by your actions, not by what you say on Twitter or your blog that you only say because you know fellow virtue signalers will then compliment you. Trust me, I hate the nastiness of social media. I hate all these escalated bitter arguments online. I hate the trolling. I never seek out someone I don't like on Twitter and reply to their tweets. But with all that said, getting on your soap box and telling fans they can't poke fun at rivals, doesn't make you a good or better person. How you treat people when no one is looking is what matters.

Kyrie, LeBron, Bill Laimbeer, Ralph Sampson, Kareem... name your Celtics rival in history. They get more love in a day from strangers than you or I will receive in our entire lives. The thought that they go to the internet after games searching for validation from their rivals' fan bases is hilarious. Kyrie doesn't lose one second of sleep over a Celtics fan tweeting something negative to him. People really need to get a grip. Even if you thought Davis' joke was poor or "too soon," it was a joke that will have absolutely no impact on Irving. Let's chill on Level 10 outrage for things like that.

If anyone needs prayers for something more important than if Kyrie Irving plays in Game 5 let me know. Sorry unless he asks me himself, there are millions of other people I'm going to choose to spend my time being concerned about.