5 guys who could be the Celtics starting point guard 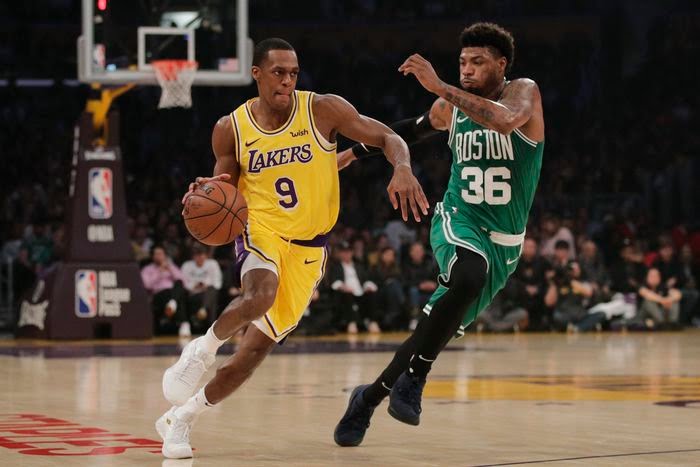 With Kemba now officially shipped off, the biggest question coming into the season is who will be the Boston Celtics starting point guard? I’ve got a couple potential options and scenarios that could play out in mind.
First, I’ll start with the obvious and at this point in time the most likely.
Marcus Smart:The longest tenured Celtic on the roster, I believe if he’s not traded should be given his opportunity to be the Celtics full time starting point guard this season. He’s the best playmaker on the team even when Kemba was on the roster and he works harder than anybody and should be given the chance. Ultimately I think Smart, in a contract year will be awarded that opportunity.
Could we see an old face come back to help propel this new young core to the promise lands?
Rajon Rondo: With Reggie Jackson coming to life in the playoffs, and underwhelming numbers by Rondo himself, he may not be as needed in LA as once thought. A swap of Tristan Thompson and Rajon Rondo would actually save Boston about $2 million cap wise and may be of better help to the Jay’s. Rondo would be the perfect guy to mentor Payton Pritchard while also creating better opportunities for Jayson and Jaylen as well as finding Fournier and Nesmith for open jumpers. Who knows how much he has left in the tank, but this would also be an awesome storyline going into the season.
Let’s get into some other outside-the-box type guys who could potentially find their way into this role.
Delon Wright:  A swap of Tristan Thompson and Delon Wright would work perfectly with no salary fillers and could benefit both sides. Sacramento already has their point guard of the now and the future with Fox, and two of their big men Holmes and Whoteside are free agents who will probably command larger salaries than their previous deals which makes Tristan perfect to be able to replace one instantly. They also still have flexibility as TT is an expiring contract. Wright posted 10/4.6/5 on 46% shooting this season so Boston could also need to kick in a second round pick and a young guy, perhaps Carsen Edwards. Delon is a fairly efficient scorer and can both rebound his position and distribute. He could certainly slide in next to Smart in the new starting backcourt. He is also on an expiring deal so Stevens retains that cap flexibility he is seeking for the next few seasons.
Patty Mills: The long time Spur will be an unrestricted free agent this off-season and perhaps he could be looking to change this up and maybe even follow his old assistant coach Udoka to Boston? Boston won’t have much to spend in free agency, essentially only having the vet minimum and mid level exception of just under $6 million to spend. If Mills sees the Jay’s and young core as something he’d like to be a part of I feel that the transition from San Antonio’s to Boston would be pretty seamless in terms of team culture. He’s not the distributor type point guard as his career high in assists is 3 but he can put the ball in the net and is a competitor in the biggest of moments. If I’m Boston, he’s at the top of my free agent wish list for the mid level exception. Also, if Boston deals Tristan which is highly likely, they could use the full exception worth $9.5 million that they used on TT last season.
Boston could opt to leave Marcus in the shooting guard role with Fournier off the bench (assuming he re-signs).
Payton Pritchard: After his surprisingly effective rookie season, I could see his role expanded into a starting position this season alongside Smart in the backcourt. Payton showed the ability to distribute, shoot, and run the pick and roll very well this season and that was without the pick setting of Al Horford available. I would love to see this become the reality as Payton quickly became a fan favorite this past year and held his own defensively for the most part. He certainly did get picked on at times as a rookie and undersized guard but he isn’t that micro 5’11” frame point guard we’ve gotten used to in Boston. Marcus also seemed to take a liking to Pritchard very early on in last season for his work ethic and the way he plays the game so that chemistry could develop into a good thing for Boston.
It certainly will be interested to see what new President Brad will do about the position this off-season. There are plenty of routes he can take, each with their own set of pluses an minuses.