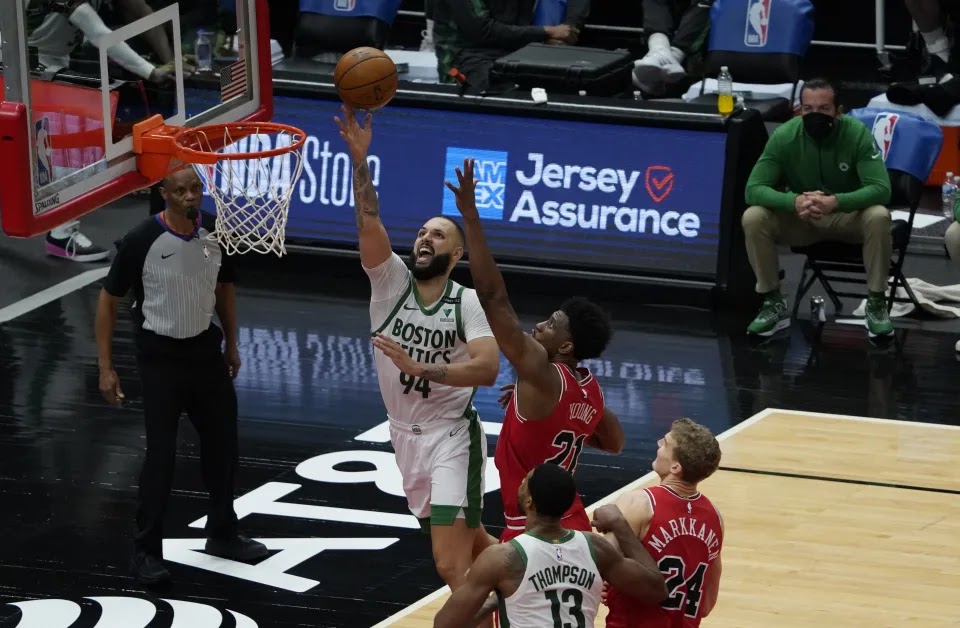 Well shit. On a night where the Celtics should’ve capitalized on a Knicks loss, they blow the opportunity by losing to the Bulls who are hanging by a thread. Things have gotten a lot harder for the Cs now. They still have a chance of getting the four or five seed, but their margin of error just became smaller than it already was; plus they are going to need a good amount of luck. I mean what the hell? Where is the sense of urgency from this team? It bums me out to see them lose to continue to lose to teams who are worse than them.

Once again, the Celts have more wins against .500 or better teams than the current 4, 5, and 6 seed

The injury problems continued last night as Jaylen and Rob Williams were out, but that wasn’t a valid excuse for the loss. The Cs were still very capable of beating the Bulls. The Bulls just wanted it more; they were way more physical than the Celtics, they outhustled them, their role players showed up, they were knocking down threes efficiently and they hit their free throws. Freaking Coby White hit 7 threes and Vooch had a triple-double. Respect to them because they were fighting for their postseason lives, but it was unacceptable for the Celtics to get bitched like they did last night. Most of the Celtics played like there was nothing to fight for.

The Celtics kept it close in the first quarter, but the second quarter was a disaster. It’s the same old story for them because when shots aren’t falling like last night, everything else dismantles; they stop playing intense defense and then try to play catchup by shooting forced jumpshots. From the beginning of the second quarter to 2:46 left in the quarter, the Celtics only made 5 field goals; all those shots were either layups or dunks. Also in that time span the Celtics went 0-9 on jump shots from 15+ feet. I understand that the strategy is to hit threes, but when the shots aren’t falling someone needs to realize that the move is to drive it to the basket until the team sees some shots go through.

After the second quarter meltdown, things didn’t get much better. They hung around for half of the third quarter, but the Bulls just kept hitting shots after lackluster defense by the Celtics. The real turning point in the third quarter was when Tacko Fall entered the game. When he was in, it was like the Bulls saw it as a challenge; they would drive right up in his grill and take advantage of how much slower the Celtics became defensively as he was out there. The Bulls got their lead up to 20 by the end of the third.

Once again, the Celtics made it interesting in the fourth quarter but couldn’t make the comeback. They cut it all the way down to 8 with 5:19 left in the game after a wild Grant Williams dunk attempt, but from there the Bulls quickly went on a 10-0 run to make the game out of reach once again. There was some pretty pathetic defense in that last run.

I can confidently say that the Celtics would’ve won this game if they just got a little more production out of their normal contributors. Tatum had one of his least productive games in a while. He had 9 points on 3-15 shooting (0-7 from three), but most importantly he just didn’t seem locked in last night. He had one actual shot attempt in the fourth quarter that got blocked and he had one trip to the free throw line where he missed one of the free throws. He just wasn’t involved when we really needed him to be. Obviously can't get too mad at Tatum though considering how much he's carried this team. Marcus Smart also struggled last night, only scoring 4 points on 2-7 shooting (0-4 from three). He’s been a real slump lately, shooting 26% from three in his last 10 games. Gonna need him to get his shit together before the playoffs (or the play-in).

It’s also a bummer to look at how weak we are at the center position when Rob is out. Before the trade deadline, center was probably our deepest position. Now that Rob’s health continues to be an issue, my anger of giving up Theis for financial reasons grows. That move looks horrible in retrospect because of how many games we needed an extra playable center.

The only positive that we can take from last night’s game is Kemba’s performance. He looked like the only one who really wanted to win last night. He had another 30 point game and was the motor to the team last night. This was his second night in a row with 6 made threes and his third night out of four games to put up at least 30 points. When no one else had it going, Kemba was the one to take it to the basket and draw a foul. He did a good job finding his shots and staying confident. I feel like I sound like a broken record here, but Kemba Walker is huge to the Celtics’ success. If the Cs want to hang with any of the big dogs, then Kemba will need to have it going. Side note: I thought Fournier and Grant (at the 5) played well last night too, not that it really matters though.

Celtics are literally a crap shoot to keep it together when they are missing a starter but we know they’re not going anywhere in the playoffs if they are missing any of their core rotation guys anyway. I think the more prescient story is Kemba scoring 32/33 in 3 of his last 4.

So with that loss against the Bulls, it looks like the Celtics will need to win both games against the Heat to avoid the play-in. Those games should be fun to watch because it'll feel like a playoff atmosphere. Unfortunately for the Celtics, the first game is a Sunday matinee, in which the Celtics tend to play their worst. Here are some notable Sunday matinee games: the 100-75 loss against the Knicks, the 104-91 loss to the Wizards and the 120-115 loss to the Pelicans where the Celtics blew a 24 point lead. Also the Celtics might be without Jaylen and Rob once again. So the odds are not in the Celtics’ favor right now, but nothing about the 2021 Celtics make sense so honestly anything can happen.

GAME STORY: The Celtics lacked energy tonight in the loss to the Chicago Bulls despite big nights from Kemba and Evan Fournier pic.twitter.com/9MBW3A4Hkx