Isaiah Thomas: "Man I could help them Lakers boys during this time!!!!" 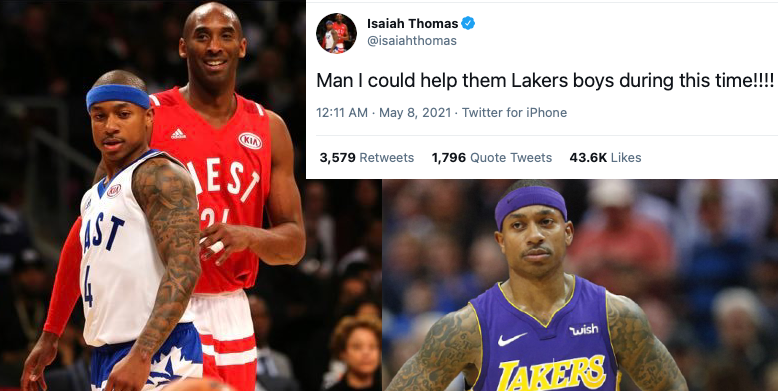 I know Isaiah Thomas is trying to be humble and has said he'd accept any role on an NBA team, but I don't think any of his tweets about his NBA status help at all. Many have called it "begging," but that's insulting to Isaiah. He's just a man who loves the game of basketball and believes in his heart he still belongs in the NBA. And that love of the game and confidence is what helped him reach the peak of the NBA.

The Lakers aren't going to sign Isaiah. They had him once already and moved on. LeBron James who I'm sure every move was made with his knowledge in Cleveland also played with Thomas and that didn't go well either. Thomas was traded to the Lakers at the deadline. Everyone loves Isaiah, but his NBA days appear to be over. His claim that he was back to his old self didn't pan out with the scouts that watched him play with Team USA and the New Orleans Pelicans. Yes, he can still create shots for himself, but that ability is not enough to get you on an NBA roster. If he was younger, sure teams would take a chance on him, because there would be the potential to improve.

Man I could help them Lakers boys during this time!!!!

I feel like Isaiah would thrive overseas. He's a well known name and decline in his game would be offset by the lesser talented leagues. Stephon Marbury had a fantastic final act on the basketball court winning championships in China. Right now Isaiah is just burning quality years hoping to get more opportunities in the NBA. Overseas he'd put up like 35 points a game and no one would care about his defensive deficiencies because he was bringing elite offense to the table. I hope he gives this option some thought.

Regarding Isaiah's tweets to NBA teams, it looks like the negative comments to his Lakers tweet got to him as Thomas a short time later tweeted that he was taking a break from social media.

With all the jerks & arseholes that are on Twitter, ppl can't just leave a man who is nothing but positive alone?
You're tired of reading IT tweeting how he could help NBA teams? Well there is a solution! ... Don't follow him! There is 0 need to reply to his tweets negatively. https://t.co/c16I952t5S

Again this is another reason why Isaiah Thomas should look to add a new chapter to his basketball life overseas. He's such a positive person who never has negative things to say to others, so seeing NBA fans turn on him is rather awful. If you have a league you think would be the perfect fit for Isaiah feel free to leave it in the comments section.