Jaylen Brown says "Racism is bigger than basketball;" Disapproves of way topic was brought up this week

Injured Boston Celtics guard Jaylen Brown spoke to the media prior to Game 3 of the Celtics vs Nets series. Never one to shy away from tackling the subject of racism, Brown said "Racism is bigger than basketball," but he was not a fan of the way the topic came up this week.

Sounds like Jaylen while out injured still got a shot in (on Kyrie) https://t.co/v0EklipOtF

Without calling out his former teammate Kyrie Irving by name, Jaylen said he was not happy with the way the topic of racism came up in preparation of a playoff game as a "crutch" or as a card to play for personal gain. Out of all the times for Kyrie Irving, and Kevin Durant for that matter, to bring up the topic of racism and the TD Garden crowd, right before a much anticipated playoff game was not it.

Jaylen Brown immediately received praise from Celtics fans and the media following his statement. In a way Brown's words served as an ending to the topic that has consumed this series since Tuesday night. After Jaylen spoke, everyone seemed to go back to focusing on basketball and the return of Kyrie Irving to Boston. After the game the topic of racism didn't dominate the news cycle, but instead the Celtics win and Jayson Tatum's heroics took front stage. 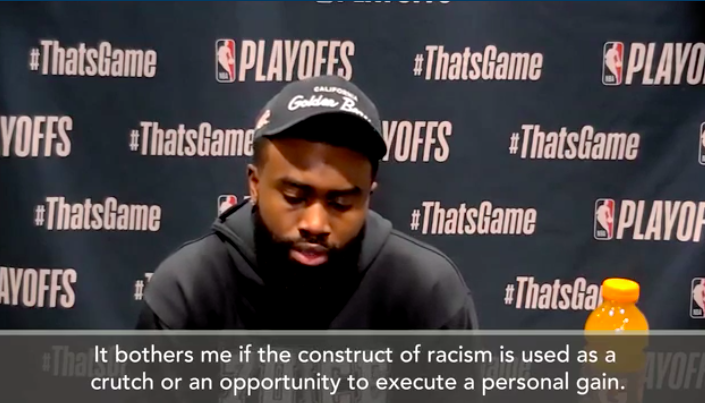