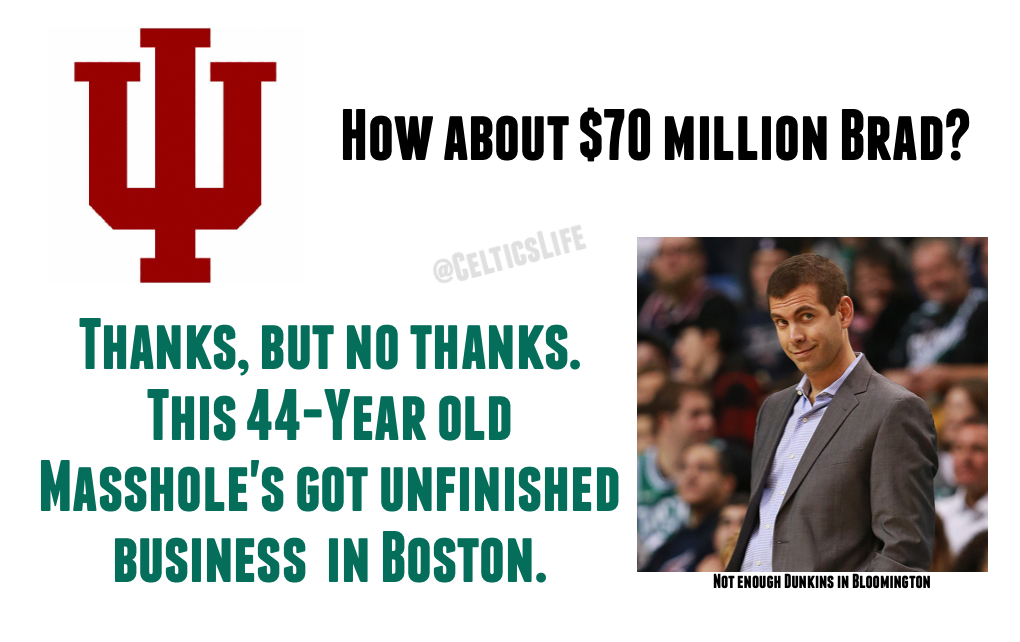 Per @wojespn on "NBA Countdown:" Celtics head coach, Brad Stevens was offered a 7 year, $70M contract to become the head coach of the Indiana Hoosiers which he turned down 👀#NBA #NBATwitter #TheJump #BleedGreen pic.twitter.com/ShwEMnNyv7

If you were one of the reporters that scoffed at the idea there was any smoke to the talk of Brad Stevens becoming the new coach of the University of Indiana, looks like you were proven wrong today. And that includes Woj who was no where to be found when the day's rumors got hot, but smugly chimed in after Brad Stevens's famous 44-Year Old Masshole press conference that no coach would ever go back to the NCAA from the NBA. Then all the blue check marks who were also silent during that day parroted Woj. One of their main points was that you get paid a lot more in the NBA.

Yeah about that... Stevens agreed to an extension with the Celtics early last summer. He wasn't just going to bail at the first sign of some adversity halfway through this season. Now if the timing was different, like the Celtics got bounced in the first round and the negative voices of Boston media and its fandom started rearing their ugly heads? Then yeah a guy like Stevens would definitely consider bouncing back to the NBA. And for elite coaches like him, they can make just as much of not more in the college game.

Stevens proved his loyalty by turning down this Godfather offer from his home state's top school. While he hasn't had the best year running the show this regular season, his track record speaks for himself. He's a very good coach. No coach is perfect. We're lucky to have Brad in Boston.

The 44-YEAR OLD MASSHOLE, Still Coaching the @celtics in a @tdgarden near you! https://t.co/Ed5JkeAYFf pic.twitter.com/2Iin2bcpYy