Another Celtics game, another Celtics win. Was looking pretty ugly in the first half, but Boston went on a nice run to end the first half. Jayson Tatum had 23 at the break. The 2nd half was a good old fashioned shootout. Steph Curry finished the game with 47 points, but Jayson Tatum's Celtics got the win by a finals score of 119 to 114. The celtics win streak now stands at 6 games.

The Celtics franchise forward finished with 44 points and 10 rebounds. Kemba Walker who low key is looking like his old self added a much needed 26 points and 8 rebounds. The Celtics played the game without three of their top 6 players in Jaylen Brown, Time Lord, and Evan Fournier. Part of the reason they had enough weapons left to take down Steph, Draymond, Wiggins and the Warriors is because Jabari Parker provided a tremendous spark off the bench.

After turning the ball over twice as soon as he entered the game in the 1st quarter, Parker quickly worked off the rust and contributed a very solid 11 points and 4 rebounds in his 15:45 minutes of action (and no more turnovers the rest of the way either). You have permission to be a little bit excited about what Jabari can bring to this team.

I'm enjoying this “How Jabari Got His Groove Back" showing so far. 11 points in 13 mins off the bench so far for Parker in his Celtics debut. ☘️💪 https://t.co/vj61hiwlD3

Kemba told me pregame that this is the best he's felt since he got to Boston, and it's not only changed what he can do on the court but his confidence too. You saw it on that shot.

Jayson Tatum with his son Deuce after putting up 44. 🙌 pic.twitter.com/Nn9g27wqX3

Kemba Walker talks about what it took to close out the game tonight. pic.twitter.com/2AZDQiQEIc

Said after the Denver win maybe we look back after it‘s all done and say that’s where (fill in the blank) all began...
tonight makes me turn out the light thinking maybe it was... 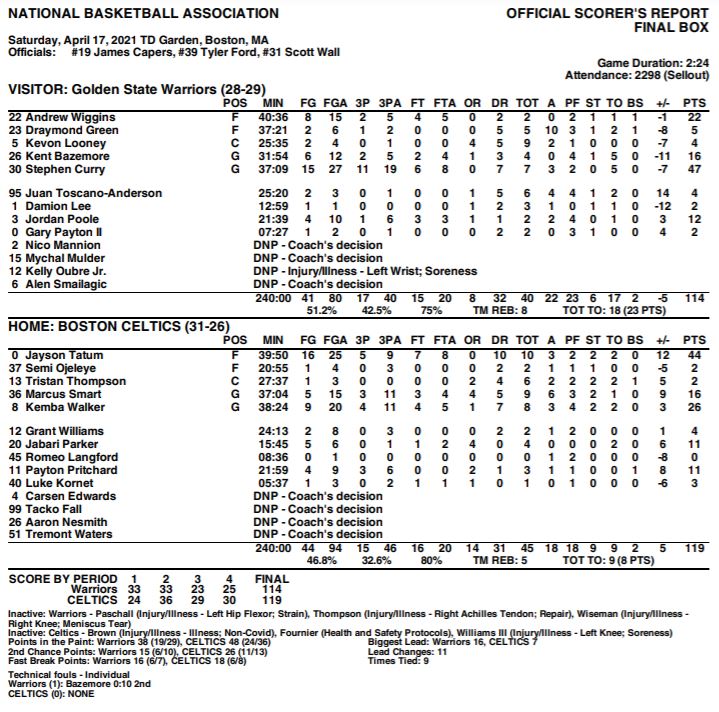